Why this does not work

My general dislike of Internet memes is well documented.  Yes, sometimes they hit home and make more sense than what is taught in our universities or reported in our news media nowadays.  On the whole, however, at best they're a poor man's editorial cartoon, but without the wit. At worst they're used to attack, lie or otherwise misrepresent issues and people. 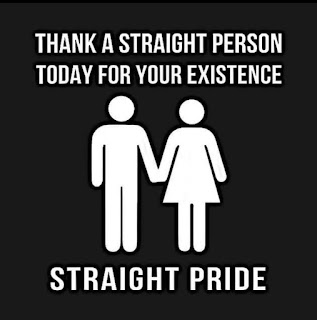 Yeah, I get it.  But here's the point.  First, I know it's a joke.  I get jokes. I have a sense of humor.  But that's falling into the pit of sin that somehow we'll fight the Left by adopting its elevation of pride as virtue and biblical ethics as dependent upon one's group identity.  That's one problem.

The other problem?  Pride in being straight?  That's like saying pride in gravity.  To imagine there is some alternative to being straight that being straight has to vie with is already conceding the position to the opposition.  It's playing their game, as if Straight is the option I'm proud of, as opposed to that other legitimate option they're proud of.

I know.  I'm being a poo-poo.  But you get my point.  I've said one way in which Christians, as well as the broader world of conservatism in general, have lost has been repeatedly conceding the high ground with a host of issues by accepting the rules, the premises, even the broader narratives of the Left.

That would be like playing a game of Monopoly with someone who insists on writing their own rules.   So they demand the game begins with them having all the money, all the properties, railroads and unities, and hotels on every monopoly - and you say, OK, that's fair, let's play.  I'll bet you lose. And so those who would resist the Left by conceding the Left so much ground have lost, and lost, and lost again.

That's why I'd wager LGTBQ activists are more than happy with something like this.  Not only can they shoot it down, as many FB commenters did, insisting with science and laboratories we have all we need to get gay people pregnant today. But in their guts, they know somehow we're handing them a tremendous amount of high ground in the process by accepting their basic premises.