The Ninety Foot Idol of the Leftist State

Is a jealous god, and will allow nothing but 100% worship and obedience.  So Salon, one of the left of Lenin rags on the Internet completely devoted to the Leftist State, swoops in to attack various former superstars of the "New Atheist" movement.  Why?  Because such thinkers as Richard Dawkins and Sam Harris have begun  to question the intolerance and thought control of the modern Left.

Whether it's the Left's invoking the glorious censorship of offensive art and literature, or punishing a scientist who believes boys and girls exist, these former warriors for the secular have begun to question where this beloved leftwing movement they once proclaimed has gone.  They aren't alone of course.  Bill Maher, Stephen Fry, John Cleese - the list is endless of hard left, secular, atheist, or pro-liberal dogma advocates who are nonetheless squeamish about the Red Scare mentality of the New Left.

The funny part of this?  Behold, the good deacon and film critic Steven Greydanus rushes in on Twitter and gives his thumbs up - to Salon: 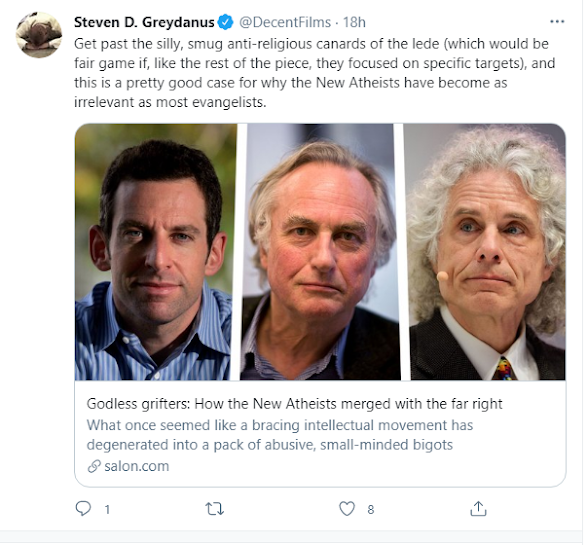 Yep.  Note that. His only beef?  Salon's hatred of religion is too broad and could include people like, well,  possibly Deacon Greydanus.  If they narrowed the hate and intolerance a bit to focus on those religious types who are clearly the problem, then this assessment of atheists daring to question the dogmas of the Leftist State would be spot on.  Apparently they are now irrelevant because they dare support those on the Right worried about the totalitarian mentality emerging to the left of center, as opposed to being radical atheists whose atheism was often plagued with problems from a religious perspective.

Of all the Catholic internet stars who have fallen from the firmament, few have done so as quickly or completely as the good deacon.  Few exemplify the necessary belief that the Left will ever and always go after *them* as opposed to me as he does.

I personally think that is one of the more harmful aspects of the Pope Francis pontificate.  He seems to have sanctioned this idea that we have found the problems of the world, and it's 'those' believers over there.  You know, the rigid ones who do things like apply adjectives to other people.  Though that attitude would be necessary for the 'I'm sure they'll do it to thee, but never to me' attitude that has to be behind such support for what we're seeing today.

Email ThisBlogThis!Share to TwitterShare to FacebookShare to Pinterest
Labels: Catholic Church and the Left, Liberal "Tolerance", The End of Liberalism