Russell Moore joins Beth Moore in abandoning the Southern Baptist Convention. From those I know who are still in the SBC, the general response will not be weeping and gnashing of teeth among those he leaves behind. 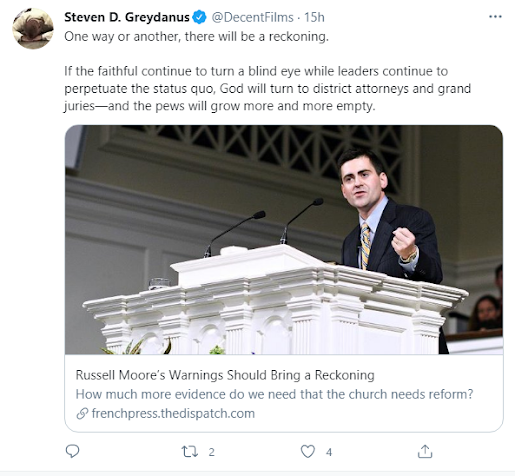 You see, contrary to the observation of Deacon Greydanus, who has showered Dr. Moore with great praise, as well as others who have lifted him up to his opulent office in Manhattan, most I know in the SBC who follow the news have no beef with Moore per se.  If he chooses to oppose Trump, so be it.  If he wants to hang at gay wedding receptions, that's on him, though many think that's a step away from compromise and sin.  The problems the convention is facing, they say, are problems that need addressed - together.

They wouldn't care so much if Moore didn't come off as, well, a snob.  A man who consistently says, "Hey World, look at those loser racist misogynist Baptist deplorables over there, let's get'em.'  If he didn't constantly talk of those who disagree with him as if they are a bunch of stupid, bigoted reprobates who simply don't see his obviously superior position and infallible standards that should be the measure for all others to follow.  That is what set most of them off.

I knew Russ in seminary.  Not personally in a close friendship way, but enough to notice some things.  He was part of the Mohler revolution.  If he really loved Catholics as he has said, or despised the fundamentalism that accompanied that bold change in Seminary life, including the belief that women do belong in the home, he kept such thinking to himself.  He was never one who suffered from a disproportionate level of humility, so those who criticize his high and mighty contempt for Baptists who disagree with Russ are easy to sympathize with.

Like Beth Moore before him, who chalked up all criticisms of her ministry as being the result of misogynist men who displayed their woman hate by pointing out she was easy on the eyes, Russ has bolted from the Convention that made him one of those lucky few who live in wealth and luxury for the Prince of Peace.  With his departure, he bemoans the hatred and attacks on his family by all those white supremacists who seemed to have eluded me in my Baptist ministry days.

Oh, I saw racism of course. Really.  Real, honest racism.  I once was asked to fill in at a church one Sunday.  I delivered a message that included  a story, courtesy of Tony Campolo, about a young man coming to realize the humanity of a single mother in the inner city; a mother who happened to be African American.  After the service, a family invited me to dine with them at their Sunday dinner in the best manner of Baptist eating.  During the meal, I was gently informed that if I come back, I might not want to use Black people as the center of an illustration.

So I'd be stupid and a liar to say there was no racism.  Sure there was.  Good old white racism against non-whites, but back before racism became the all defining, unforgivable monolithic sin that a growing number of religious leaders now admit it is.  Of course, when working among the inner city missions, I encountered anti-white racism among some black pastors I met.  Among some women I knew there was prejudice as well, including anti-male bigotry.  There was bigotry and sin across the board, from people I knew overseas to those at home - all of those people being human, sin happens.

But Russ has bought the Leftist bug that there are only certain all defining and all encompassing sins based on skin color and political party as defined by the modern Left.  His contempt for those targeted by the modern Left, while accepting of others who toe the leftwing line, is what made so many in the convention upset.  I don't think there will be many tears shed at his leaving.

And if Moore, or the author of the piece, or the good Deacon Greydanus, yearn for a time when God seizes the crushing power of Rome and Caesar to finally stamp out those who stand in the way of the New Left and its new American church, then we'll just have to see. Given what the new Left stands for, I don't think I'll sweat it.  If the courts and the State come after us, as some apparently are hoping for, it likely won't be at the behest of the Almighty, unless the first 2000 years of Christianity were as disastrously wrong about almost everything as some would have us think.