Mothers have no special value where raising kids is concerned

It must be true, it says so right here in the NYT: 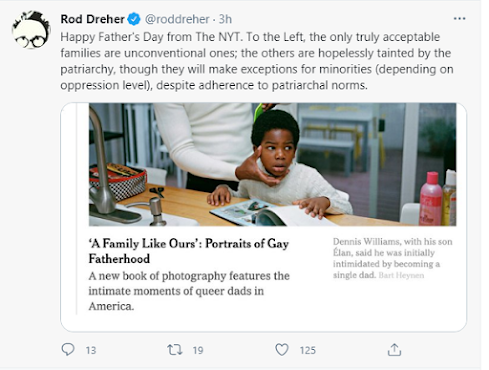 Of course that's not what the NYT is trying to say.  That's just what is implied, as many things that promote leftwing agendas can send shivers down the spine when you consider the implication of what they're saying.  In this case, the NYT, like all leftwing propaganda organs, is about destroying the concept of anything true or real other than the dogmas of the Left.  Families? Whatever you want them to be.  Gender?  Whatever you want it to be.  Napoleon Bonaparte?  Whatever you want him to be.

So the purpose of the piece is, no doubt, to insist it's the most normal thing in the world to define family, reality and whatever you want however you want.  Exactly what is true about the wellbeing of kids raised by same sex parents is tough to say.  I didn't find much info out there, at least info not reported by the propaganda ministry.

Like the lack of hard evidence that looser gun laws leads to more gun violence, I'll bet that's because the stats don't benefit the agenda.  In fact, I've come to assume that if I don't hear something reported in our modern propaganda ministry, I'll assume it's because that something is true, and yet not helpful to the Left's agendas.

I could be wrong of course.  I did find this study, which actually suggests it's not always a healthy thing for kids to be raised by same sex parents.  But that was one.  Others I found through Google were merely news posts praising the glories of same sex parenting, or a few obviously traditional, Christian sites insisting it's bad - both sides seeming to be rather biased in their approach to the subject.  This was the closest thing to a study by something not immediately connected to such agendas, and it doesn't read well for the LGBTQ parenting movement.  But it's only one study.

Nonetheless, I doubt we care.  Based on National Geographic interviewing experts from Harvard and Johns Hopkins a few years back, we're still trying to pinpoint why a disease spread overwhelming by sexual behavior and drug use like AIDS suddenly exploded in the world during the 1970s. Big mystery that.  An age willing to look away from a mounting pile of dead bodies numbering in the tens of millions rather than admit the obvious is not an age that is going to sweat studies that don't say what it wants to hear.

Posted by David Griffey at 4:00 PM