Deacon Greydanus knows not what he does 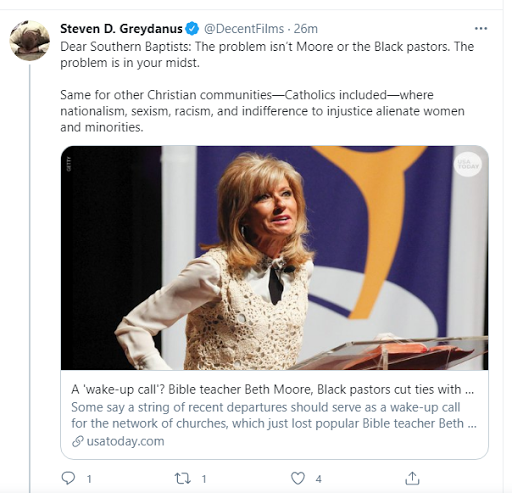 By wading into the tangled jungle of Southern Baptist culture.  Fact is, from a purely orthodox Evangelical perspective, c. 1990s, losing Ms. Moore, at least as a 'Bible Teacher', would be like Van Halen losing Sammy Hagar.  Despite her sucking up to #MeToo claims that criticism of her was due to sexist men, it was actually based on substance.  For most of us, her Bible studies came off like a loosely Evangelical combo of Oprah and Smilin' Joel Osteen.  She often seemed a mile wide and an inch deep.  While not all of what she produced was bad, it smacked more of the 'Talk Show' feel that was the rage in the day than a grounded approach to Scripture study.

As for the black pastor, I have no clue.  I see he posted on his church's Facebook page that learning figures in the Bible, like Solomon, were black makes it all the more special.  I guess embracing the idea that it's really all about the skin color.  Other than that, I don't know.

I do know the tangled mess of SBC polity is something best not commented on, especially if you're Catholic.  Because, you see, Moore and the pastor and others in question can do just what they're doing.  That is, if they don't like their current denominational affiliation, they can happily ditch it and find another Protestant denomination more to their liking.  A characteristic of Protestantism that Catholics rightly criticize.  It's something that has been a cancerous rot in the greater Church for centuries: I'll choose the faith tradition that fits best.  Doing so under the modern 'because their politics are the problem and I'm not' template only compounds the scandal.

Catholics can't do what Moore is doing, however, and must take the good Deacon's approach of blaming the Church's ills on those other Catholics over there who don't approach political narratives like the way I do.  Though so universal is the 'Be Leftists or be Nazi' paradigm, notice that both Catholic Deacon Greydanus and those Evangelicals interviewed in the article accept it as the goto ecclesiastical framework.  If you aren't aligning with the Left's narratives, you're a nationalist (read: Nazi), racist, sexist, etc.'   That framework is, in the end, simply a 21st progressive version of 'thank you, Lord, that you didn't make me like those wrong politically thinking Christians over there.'

Posted by David Griffey at 8:33 AM