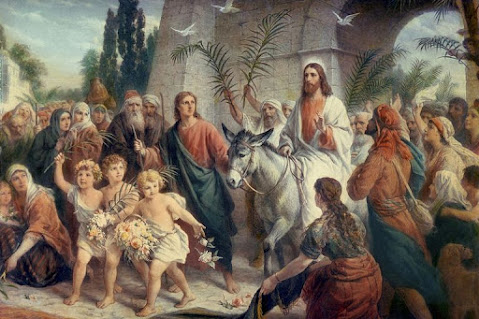 The beginning of Holy Week.  For Western Christians that is.  The Orthodox, forever stubborn where changing to align closer to their Western brethren is concerned, will be following in a few weeks.  But the days and the week itself are largely the same: the most holy and sacred time of the year.

Not Christmas, despite what St. Madison Ave. might tell us.  Or even Rankin/Bass.  Christmas was actually a Johnny-come-lately in the big holy days of the early Church.  Driven largely by the Alexandrian school's obsession with unpacking the deeper implications of the Incarnation, it was logical that such an emphasis would lead people to want more focus on the front of the Jesus story to set the proper stage for what ends up on the cross and in the empty tomb.

Some say only two Gospels have birth narratives.  That's not true.  John also has a birth narrative, albeit from a decidedly high philosophical perspective.  Nonetheless, Mark gives scant little mention at all, other than saying this is the Gospel of Jesus Christ, on we go to John the Baptist.  But the Passion?  The Crucifixion?  The empty tomb?  Those are in all four, and were key to the early Church's understanding of what this new Way was all about.

For modern Christians, as we see ourselves in the age of Apostasy when so many believers are abandoning the faith altogether, or are twisting and turning, jettisoning and acquiring in the face of a rising tide of hatred of God, Christ an His Church, it's worth ponding the more obvious of angles to take this day. Today is the Triumphal Entry, as it's sometimes called.  That's Jesus arriving in Jerusalem to the cheers and adoration of the crowds Beatlemania style.  And we know what happens next.  By Good Friday, many of those cheering Him today will be screaming 'Crucify Him!'

Will that be us?  Right now many are still holding firm, but how long?  We've seen so many jump ship, abandon the values and teachings of the Faith, compromise, look the other way, as our nation, civilization and world turn its rage and anger and hatred of the Gospel into full warfare.  Will Christ find any left who are faithful?  No doubt He will.  But who will they be?  Per Jesus, they will be the few, not the many.

So perhaps this year, as we look to Good Friday and its almost clichéd application that we hear every year, it might be time to rethink what it was telling a Church already knee deep in Roman persecution.  For the stories of the Jesus event were being written down in Gospel form when Christians were learning that Rome was no longer a safe haven.  Many would gladly bow before Caesar, offer sacrifices at Caesar's altar, and even betray their brethren to save their skins. If they had to deny Christ to save their lives, they would.

We love the stories of the saints and martyrs of history, the ones who paid that full measure of devotion for the Gospel.  But for each of those who did so, as many if not more didn't.  And that's as it always is in history.  For evil to Triumph, good men have to make lame excuses, quit, buckle, surrender and look the other way.   Good men never do nothing.  They always do something to open the gates of history's next reign of terror.

Just some thinking as we look at the remarkable - and frightening - turn of events we've witnessed in just the last six years, much less the last  year.  Satan is cracking his knuckles, itching for the great infernal harvest.  Those of us who are loud in calling out the turn of evil we're watching, how will we do?  Will we persevere?  When the time comes will we, like most of the disciples, turn tail and run?  Indeed, as so many are doing today, will we join one disciple and betray?  Or will we be the minority, the few, who follow Jesus to the Cross, braving capture and exposure; prepared to take on whatever mandates Christ would have of us?

Only time will tell.