Mass shootings and the ministry of lies

The press is dead, long live the propaganda ministry.  So when a man went on a killing spree and killed multiple victims in different massage parlors, the press almost immediately framed it as a racist hate crime.  Why?  Because most victims (not all, but most) were Asian and the shooter was white.  The shooter then claimed it was due to his spiraling sex obsessions gone out of control, lending credence to the old Christian principle that the wages of sin is death.  Really.  Sin leads to death.  Spiritual death and, as often as not, some variation on physical death.

But not to be undone by reality, the press tried to make it about the sudden spike in anti-Asian crime.  Why this focus on anti-Asian crime?  Likely it's a preemptive narrative meant to shut down questions about Covid's origins and China's role in the entire pandemic.  You know, if you're asking the question, no doubt you're an anti-Asian racist who clearly wants as many Asians to die as possible.

Then a shooter walked into a grocery store and opened fire, killing ten victims and no doubt wounding many others.  There was no immediate narrative because the identity of the shooter remained fuzzy.  Early video showed the police escorting the suspect away, and those early clips made the suspect look mighty white.  Which was good.  That's more white racists killing people.

But then things went wrong.  First, more evidence began to pile up around the massage parlor killings that the shooter's own testimony about his motives seems more likely.  After all, a racist hate crime doesn't only have to include victims of the particular targeted race, but it would help if there had been an Asian restaurant, or an Asian business or anything else included, rather than exclusively focused on massage parlors with a reputation of providing more than just massages.

Then, worst of all, the identity of the Colorado shooter was revealed to be quite Muslim sounding and, even worse than that, an individual with social media posts railing against Donald Trump, Islamaphobia, and even such specific topics as immigration. Eeek.

Beyond it being the first mass killing by a self-identifying Muslim since before Donald Trump was elected, the last thing we need is to look at motives if it doesn't include white people or men.

Of course we can always default to gun control as good as any.  That's a standby for mass shootings where group identity can't become the story.

But here's a guy with anti-Trump posts?  A guy with posts reflecting the media's own narrative of widespread Islamaphobic bigotry?  A guy who sounds pretty darn Muslim, if not Middle-Eastern?  What to do?

Well, do what all the media outlets I saw cover this have done.  First, spread doubt that a person who posted anti-Trump posts could really be motivated by things like anti-Trump feelings.  I mean, that's true. Just because someone posts something does that mean that was the motivator for the deed?   Not necessarily.  There are times the media loves nuance and death by a thousand trivial suppositions.  Come on, his anti-Trump posts are likely nothing at all, no clear reason to link those to his motives. I mean, if he had pro-Trump posts, do we really think the press would link his support to Trump with the violence?

But his homophobic posts?  Ah, there you go.  He said something about Harry becoming Sally and his high school spying on him.  The media doesn't need to say there is a connection.  It's enough to keep mentioning it.  Over and over and over again.  The press isn't say he was motivated by homophobic bigotry, since there is nothing to suggest the victims had anything at all to do with the LGBTQ community.  It's enough to just say it.  That keeps the press from saying the nasty stuff that might hamstring the all important narrative.  Sort of a 'you know how murderous those anti-LGBTQ types are' without saying it, all while deflecting from other nasty conclusions about his motives.

And all those pesky images of his anti-Trump, pro-leftist narrative posts: 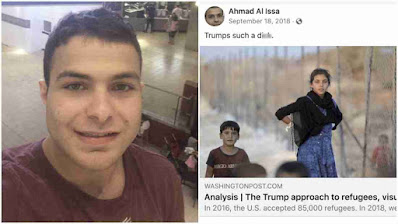 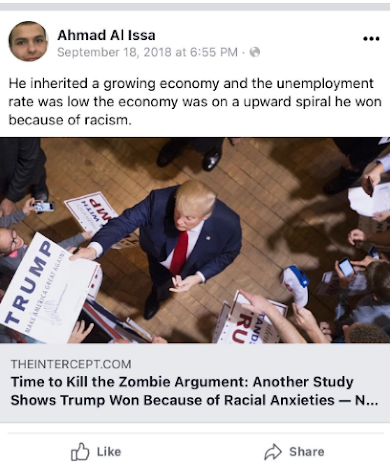 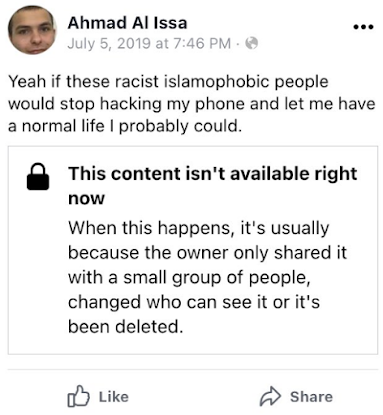 There comes a point when we begin to realize we know less about what is going on in the world than a 1st Century Roman or Medieval peasant would have known.  We think we know, but do we?  To trust what is on the Internet is difficult at best.  To trust what we are told by the news media is foolishness.  So how do we really know what is actually happening in this small, small world?  I don't know which is worse, that the press assumes we're stupid enough to believe this bilge, or that most today will actually (or conveniently) believe it.

That's why it makes the most sense to pray. God knows even what the press chooses not to tell us.  Pray for the poor victims.  Pray for their families. Pray for the families of the shooters and all impacted by this evil.  Pray that people turn back to God and the source of every good and perfect gift.  And pray that the world turn to Christ, the author and perfecter of our faith.  Any trust in the horses and chariots of Washington rather than praying would necessitate us at least being informed.  I think by now, we should know that the last thing we are is informed.

Thus says the Lord: “A voice of lamentation, weeping, and mourning was heard in Ramah. Rachel does not wish to cease mourning deeply over her children, because they are no more.”  Jeremiah 31.15 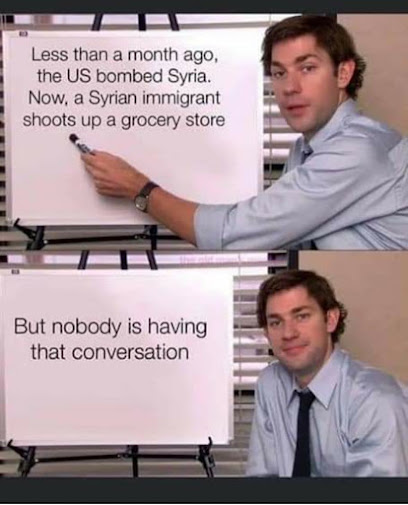 Does this mean him being Syrian, or Muslim, or any such thing had anything to do with the Colorado shooter's motives?  Of course not.  It could, but not necessarily.  But we all know damn well how the press would be framing this if he was a white Baptist with a MAGA hat.  That's the problem.  I find it more and more difficult to respect people who say they trust the national press.
Posted by David Griffey at 6:00 AM