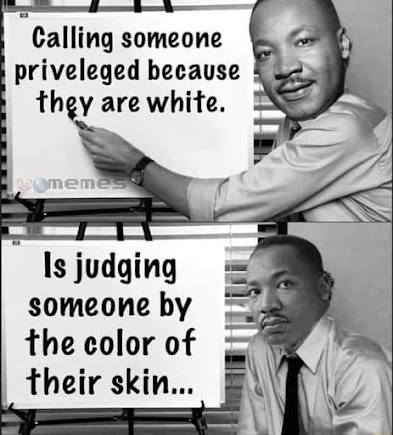 Plain and simple.  The racist idea that only certain races or skin colors can be racist is no less racist than anything Goebbels or the KKK ever said.  The promotion of racism in the name of fighting racism is racism.  What we're seeing is the same old, same old.  It may be repackaged and rebranded, but it's racism.  That it's being promoted by people of the same race that are advocating it against their own race doesn't make it less racist.

In fact, there is only one real difference between the modern racism against Caucasians and the anti-black or anti-Jewish racism of old.  Those latter two, at the end of the day, were rooted in centuries, or even thousands of years, of bigotry, ignorance and prejudice.  Hatred of Jews or contempt for blacks had been around for endless generations.  Many who repeated or added to the bigotry were only doing what they learned and what the broader world said was as true as gravity or a round world.

But those embracing this latest incarnation of one of the world's oldest sins are doing so overnight.  Not only that, but they are doing so after we spent generations calling out racism as the ultimate of all human evils.  So what is their excuse?  Indeed, you begin wondering if the racism we are told to associate with the Christian West may have been delayed and slowed by the Christian witness after all.  Especially as we see those outside of the Christian fold, or those who have rejected the Christian fold, embrace in a matter of a few years what it took the civilization influenced by the Gospel endless centuries to embrace.  Makes you wonder.  Don't think I don't.

Email ThisBlogThis!Share to TwitterShare to FacebookShare to Pinterest
Labels: Bigotry for the Hip American, Racism, the Joy of Racism on the Left