Martinmas?  What's Martinmas?  I know it's Veterans Day, and it's a time I always take to thank those who served in our armed forces for giving me this freedom I hope never to take for granted.  But Martinmas?  What is that?  I don't remember any school assemblies proclaiming that when I was growing up.  But then, I am only old enough to vaguely remember mentioning He whose name can not be mentioned in schools anyway.  So, what could it be?

Turns out, Martinmas was quite the holiday back in the Old Country.  For St. Martin of Tours, it was often seen as the 'official' beginning of winter.  Just on a  causal note, we had our first snowflakes fall last night, so it isn't difficult for me to believe.  It also marks the end to the Octave of All Souls. 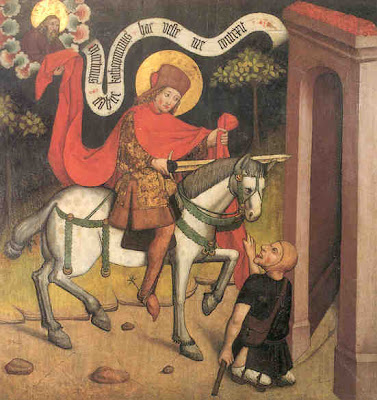 There is a lot of custom here, and it's been a bit of a disappointment how many of these little special moments in the Catholic calendar didn't make there way to the New World.  That probably comes with our Protestant heritage.  I don't look for the emerging secular dominion to look back lovingly toward reinstating any of these customs.  Still, it's nice to know.  It's nice to think of a time when the Catholic calendar was a daily event, and many special times came by for the average peasant to celebrate.

We - stupidly - think of the pre-moder peasant as some slave to labor and boredom and endless work and toil.  Us.  People who work now for less than anyone in recent memory whose main triumph is the ability to purchase a Smart Phone that's now 1/2 mm. smaller than the last one.  Oh, we have our vacation time, where we bring our phones, pads, and laptops and work most of it for fear of losing out to the one willing to labor day and night without ceasing.

But there was a time when the average peasant worked, toiled, and then celebrated.  And the Catholic calendar seemed to give no end to the days and seasons they had to celebrate.  One Medieval scholar I remember reading quipped that it was hard to imagine that they got any work done, when the number of days set aside to celebrate and feast and frolic, both by liturgy and by custom, are tallied.   Thank goodness we aren't dumb like those people!

Anyway, it was a special day.  It still is by way of Veterans Day.  But it can also be special for other reasons.  Click here,* here,** and here just for a little background.

*I know it's Wikipedia.  Typically I never reference that out of pride.  But since it's more or less for fun and frivolity, I figured what the heck.

**Fisheaters is a website I found on my way into the Catholic Church.  I appreciated it because it set out many 'what in the world is that all about' details regarding the Catholic Church.  It is from a pre-Vatican II outlook, however, and can have some pretty strong ideas about the non-Catholic world around us.  Just saying.  Still worth a look.
Posted by David Griffey at 9:20 AM