At least in my opinion.  As I said here, I consider the 1977 Rankin/Bass version of The Hobbit to be the best screen adaptation of Tolkien's works.  Since we had our annual watching of the version last night, complete with homemade mulled cider and pumpkin and dutch apple pies (again, homemade), it got me to thinking, without any real research to back it up, just why I still prefer this to any other version yet made (not that I hate the others, I simply think this the best effort to date).

Not that other adaptations haven't had talent, especially Jackson's versions.  But Jackson has an incorrigible knack for making sow's ears out of silk purses.  Take for instance the inestimable voice of Benedict Cumberbatch.  No wonder he would be cast for Smaug, the real climax of The Hobbit story.  And yet, what does Jackson do?  Spin it through layers and layers of electronic and digital remixing so as to render his distinctive voice almost unrecognizable.  So why have him?  Just to say you have him?  In contrast, Rankin and Bass got gravely voiced Richard Boone to be Smaug, and Boone nails him perfectly.  Just like Alfred Molina was able to emote in Spiderman 2 in a way the talented Willem Dafoe was not in the first Spiderman, so Boone is able to put just the right amount of sneering and arrogance into Smaug that Cumberbatch was unable to convey through the computerized masking Jackson demanded.

The rest of the cast of The Hobbit can't be ignored.  The great John Huston, who could have been Gandalf in live action, provides the narration as well as the voice of Gandalf.  Hans Conried, known to most as the voice of Captain Hook in Disney's classic Peter Pan, is Thorin.  The usual cast of Rankin/Bass faithfuls are also present, lending their expertise.  But where Jackson could sometimes waste the talent, or the production compromises the talent (as in Bakshi), the Rankin/Bass production allows the talent to shine.  Even Otto Preminger, cast as the Elven King, lends a special spin to the scenes.  With talent like that used correctly, you can't go wrong. 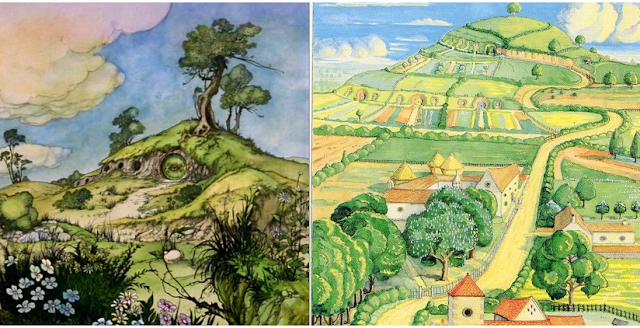 Tolkien was no mean artist in his own right.  And if you've seen the artistic vision he had for Middle Earth, you can see how Ranking/Bass is far closer to the mind of Tolkien than other versions, especially the sweeping, CGI post-Death Star, imaging of Jackson's two trilogies.   The choice of a water color base for the background captures much of the Middle Earth feel, much less the feel of a pre-modern, antiquated world that Middle Earth evokes in the first place. 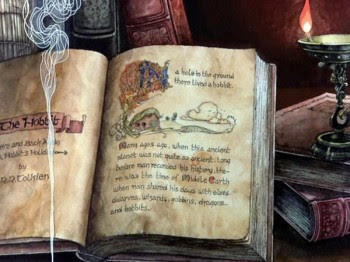 No film adaptation of a book can be just like the book.  It's not expected.  But the changes should enhance the story, or be at least as good.  The 1931 Dracula, starring Bela Lugosi, is based on the stage play of Dracula, not the book.  Kubrick's The Shining bears scant resemblance to King's book of the same name.  Even King's authorized mini-series changes things up.  But the changes must be for the good, or better, or at least take advantage of the medium.  So Puzo's The Godfather, a light porn novel with occasional mob themes, is transformed into a sweeping crime family opera by Coppola.  And the high point at the end of the film, the assassination of the heads of the Five Families, is done to perfection utilization the editing capabilities of film, versus the chapter by chapter account of the book.

So no Tolkien adaptation can be what the books are.  But they should be at least as good, or make sense.  Bakshi stripped away much of the story of the first two books and left us with a bare branch arrow shooting right across the basic story arc.  While much was missing, most of what was there still held to the essence of the books.  Jackson, of course, wanted to show the world what Tolkien should have written, and almost each time he meddles, he makes it worse than better.  Rarely do his embellishments do anything other than add confusion and plot holes, ruining characters or diminishing the impact of scenes in the book.  Great moments, such as the confrontation of the Witch King by Eowyn, or the standoff between Gandalf and the Witch King at the gates of Minas Tirith, are lost on Jackson.  Occasionally Jackson does well, as in the conversation between Frodo and Gandalf in Moria about Bilbo's mercy, or the destruction of the Ring and the flight of Sam and Frodo.  But those are balanced by so many lost or ruined chances on Jackson's part.  And that's the first Trilogy, which is head and shoulders better than the deplorable Hobbit series.

In contrast, given the confines of a 2 hour prime time slot for a cartoon aimed mainly at children, Rankin and Bass keep everything needed to get the plot.  I first saw the cartoon long before I read the book.  And when I read it, I was pleasantly surprised by how close to the story line the cartoon adhered.  Sure, there is no Beorn, and the Arkenstone isn't mentioned.  And the final chapters are condensed to the last few minutes of the cartoon.  But the basic story of Bilbo there and back again is maintained and conveyed.  And that, if you aren't going to reinterpret it artistically with an entirely unique vision, is as good as you can get.

Many decry the music in the R/B The Hobbit for its 70s cartoonish sing-song style.  And yet, that's the charm.  We read The Hobbit in light of the epic The Lord of the Rings.  We forget that The Hobbit was for children.  It was a fairy tale story aimed at young audiences.  Not the sweeping young adult and adult masterpiece sequel of 15 years later.  And in many ways, like the background art, the music seems to capture a feel for the songs and the atmosphere.  I have no way of knowing what kind of music Tolkien would have wanted.  But the songs in R&B's The Hobbit are able to move back and forth from light hearted (Chip the glasses, Where are you going, Heave-ho!), to the heavier (Mountain King returns), to the sinister (Fifteen birds).  And that's not bad.  Often music, when trying to capture 'a feel', keeps the feel across the board, no matter what the style of music or the moment in the story.  And this doesn't count the absolutely out-of-the-ballpark excellent rendition of the dwarven song of the lonely mountain at the beginning.  Partly sung, partly narrated tag-team style between John Huston and Hans Conried, it is the high point of almost all attempts to put Tolkien's songs and poetry into film in any version.  Ever.  And that's not bad for a prime time Rankin/Bass production.  But then, when you have Huston and Conried, what do you expect?

Where Bakshi and Jackson often fail the greatest is missing the basic themes of the stories.  In his first trilogy, Jackson does at least try to keep some of the basics, such as the importance of Bilbo's mercy.  But by The Hobbit trilogy, Jackson seemed to have thrown out any regard for anything Tolkien had to say.  Bakshi, also seemed to miss overarching themes that Tolkien thought important.  True, the confrontation between Golum and Bilbo in Rankin/Bass misses the emphasis on Bilbo's mercy.  But it was a one-shot deal, and without The Lord of the Rings to follow up with, that could be forgiven.  In the end, Ranking/Bass manages, through its time constraints, to keep the basic three-fold comparisons that are Tolkien's basic plot themes: Bilbo, like all children of the kindly west, like simple things, Thorin covets gold for gold's sake, and Smaug simply guards treasure he has no use for.  In the end, adventure and war may have their place, but it's the wise Hobbit who knows that food and good cheer are what make the world go around.  And in our day and age, just like the 50s, or the 70s, that's not a bad message to remember. 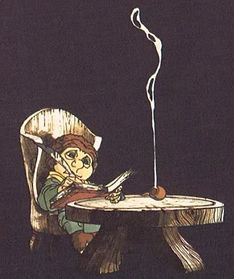