There are two kinds of Catholics in the world 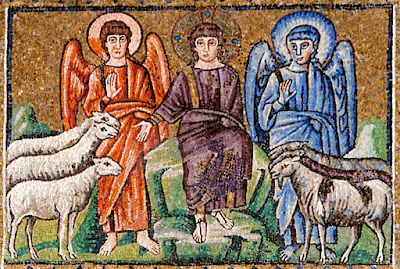 Briefly, the below the waistline variety is your basic, traditional, somewhat stereotypical Catholic of yore, focusing much on the sins of the flesh, sometimes accused of being puritanical in its approach.  A Catholic  variety of the old don't drink, don't smoke, don't chew and don't date girls who do.  Sure, gambling, drinking and other such things are OK, but much emphasis is placed on the, shall we say, carnal vices.   Much is on what not to do in life, and there is a basic traditional, even conservative way of looking at Catholic living.  Virtue is not being adulterous  gay, carousing, or embracing the seedier side of modern life.  Or pre-modern life for that matter.  This is the rural type.  Views on various sweeping political and social movements may vary, and in fact many are as Democrat blue as CNN, but when it comes to the social issues, the 'what makes me holy', they tend to default to more traditional approaches - shun fleshly lust, spare the rod, and quite frankly, realistic use of war, capital punishment, and other old time approaches to life.  In this approach, holy living is living a life of chastity, it is defined mostly by what I don't do.  Sure, good works and charity may well play a part, and pushing for justice as good as any.  But don't be shocked if this side prefers the veiled woman, the woman with long trousers or dresses, and typically would emphasize our abilities to live holy based on what we can do, not on the grand, lofty issues of the day.

The above the waistline are, for want of a better word, the 'liberals.'  That is, liberal in the Christian, even academic, sense. They've long since abandoned such notions as a real Jonah, a real Moses, or even a real Jesus in some cases.  Justice is that which is associated with promoting liberal values.  Pro-gay, pro-choice, pro-ecumenical, and even post-Christian.  Such ideas of a real Hell or God really sending His Son to die on the cross are every bit as suspect as they are in most mainline progressive Protestant denominations   Holy living, though seldom called such, is seen as supporting equality (women, gays, minorities), railing against wars and military might (at their worst, only when advanced by conservatives), and generally railing against the traditional Christian West, the United States and most things seen as foundational to those traditions and civilizations. Political Correctness and Multi-Culturalism are the name of the game, and it's entirely possibly that with no Hell to worry about, salvation is for everyone anyway, so breaking other traditional teachings in the Church is a distinct possibility.  Odd thing is, sometimes folks who lean this way are fanatics about certain things: when a prayer is said, how to stand during this or that Sacrament.  You may not have to cross yourselves any more, but by goodness you better do it right if you do.  Here, the big thing is embracing the new minorities, giving that cup of cold water, feeding the hungry, clothing the naked, and generally doing good as the Gospel calls us, to the least of these.

The last one is the one common on the Catholic Blogosphere.  These are the above the neckline Catholics.  In this world, holy living is virtually never talked about.  Generally, there is almost as much leniency toward sins of the flesh as you get in the more progressive side.  This is the one that celebrates Andy Warhol. or the late Roger Ebert, dismissing their advocacy for more porn-styled entertainment, their various approaches to Catholic living (or atheism), and more or less reminding us that God is a merciful God who is about mercy and calls for mercy and so it's all mercy.   Sympathy  if not almost complete acceptance, of gays, women's rights, popular culture, rock culture, what have you, are the name of the game.  Expect Ferris Bueller not to be condemned as a symbol of all the narcissism and hedonism that the West has achieved  but rather as a paragon of Christian virtue, a Christ figure in his own right.  So where is the angst?  The debate?  The outrage in this approach of apparent welcoming and affirming of everything?  That would be the sweeping, global geopolitical strategies and polices of the day.  It's where you stand on the Church's teachings about lying, the death penalty, wars in Iraq, gun control, war in Iran, Capitalism  Socialism, or any one of a hundred topics that dominate college textbooks where holy living is found.

Wielding the Catechism like a KJV Bible, and whipping out Aquinas  like a gunslinger whips out his six shooter, this group prides itself in its intellectual grounding on the deep and rich Catholic tradition  and dares anyone to challenge its stance on the Church, which is now always right, even if it changes tomorrow (in which case, it will then be always right).  Here, the holiness is derived by right thinking, not necessarily right living.  And unlike the former two, the feeling of spiritual satisfaction may come from being right on the teachings of the Church.  Sure, doing good to help, or refraining from orgies is good, but that's not what separates the sheep from the goats.  What does is sometimes a stance on an issue that doesn't come close to impacting me one way or another   And therefore, like much of Internet morality, it can lull me into a false sense of righteousness, especially if I'm willing to let others die if I'm wrong, but unwilling to sell everything I have and give it to the poor.  Something about that approach to Christian living  IMHO, bodes more ill than the first two approaches.

If you don't know which group I tend to lean toward, I'll bet you were able to figure the one I see as most dangerous.
Posted by David Griffey at 3:00 PM