I like Nolen. Call me a blasphemer, but I preferred his grimy tale of magical intrigue, The Prestige, to his  more celebrated Inception.  Still, both excellent movies.  My boys are impressed with his rather restrained reliance on computer graphics.  I know he's used them (sometimes obviously), but I also know he shies from using them too much.  Thank goodness.

But I had absolutely no idea that the unbelievably awesome flipping semi-truck stunt in The Dark Knight was a real freaking stunt! 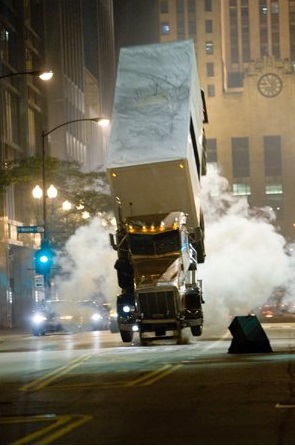 My regard for Mr. Nolan just went up two points, and it was already hovering near the top of the scale.  And lest you fear that our lazy, crazy filmmakers are becoming too complacent and just leaning on CGI, there is some hope out there, as this, this, and this link show.  Warning, it is Cracked website, so the language and general attitude can be a bit under the holiness radar.  Plus, it includes movies from quite a long time ago.  Still, it should show movie makers today that yes, Virginia, fantastic scenes can happen without having to hit ENTER.

BTW, it's in the American bloodstream to make fun of Disney's original Tron.  But it was all black and white then hand painted?  I have to look into that.  If it's true and not a gag (it is Cracked, after all), I guess I have to add a couple digits to that movie as well.
Posted by David Griffey at 9:43 AM