A simple game from simpler times 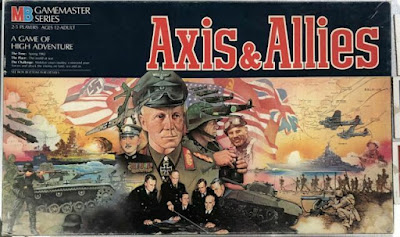 I would never say simple times, since times are never simple.  Some times, however, are more simple than others.  I would say the years of my youth, before people could be fired for suggesting men cannot have babies, was on the simpler side of the chronological slide rule.

One point in that period of my life came after my first year of college.  While my interests in history by then had swung to the more medieval, I never really lost my fascination for studying the Second World War.  At that time, this interest was renewed by those new personal computers that were all the rage.  While no doubt there were practical uses for home computers, there were also games aplenty.  One game I purchased was based on Germany's invasion of the USSR in WWII.   That helped rekindle interest in that period of history.  It didn't hurt that I also took an entire college course on the Second World War (it was there that I discovered John Keegan).

By the end of the year and following summer, I was beginning to browse the books from that class, and look for others to build upon my WWII library.  At that time, it also happened that I learned about a game that had been released called Axis and Allies.  As the name implies, it was a board game based on WWII.

Years earlier, I had become obsessed with the game RISK.  Sort of wargaming with training wheels.  Nonetheless, I played it every chance  I got with anyone I could browbeat into playing it.  There weren't as many back then, as there would be in my early college days.  Nonetheless, the chances to play were there.

While playing in those early teen years, I developed a desire to see RISK played more in the manner of the Second World War.  I even wrote out a set of rules, replacing the RISK game board with a Mercator Projection map I  owned.  I took it to a local gaming group that met in the basement of our First Federal building.  It was there I first saw that fad game everyone was playing called Dungeons and Dragons.

My interest wasn't in such fantasy fare, however but in peddling my idea for a board game based on WWII.  Me being me, however, I never saw it through.  So I was a bit crestfallen that year after  college when I learned someone else had done what I had thought of (years later I was comforted to learn A&A was actually based on a game published years before I was in high school).

As I said here, in my youth and even college days, WWII was more or less passé.  A punch line or a neat war to build fanciful action movies or video games around.  Much cultural emphasis was on the sins of America and the Allies.  And Pearl Harbor and D-Day as good as always.  Other than that, until the late 1990s, not much else other than extra emphasis on this or that key anniversary made the papers.  And even those gradually morphed from memories and tributes to lamenting our sins and evils. 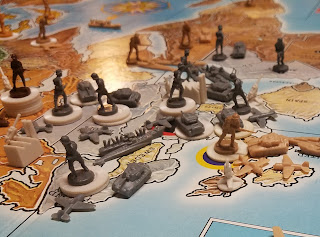 Anyhoo, that summer after my freshman year of college saw all that come back to my mind.  It also made me want to get my hands on the game.  My best friend and I drove all the way to Mansfield to get our hands on it.  He wanted to get another game, but one in the same series, called Fortress America.  In keeping with his interests in the Cold War and all things defending America, it follows a sort of Red Dawn premise where a future America is invaded on three sides.  We played it once, until he became outraged at bad die rolls, grabbed the board, threw it out the back door of his house, lost the pieces, and that was that.

My copy of Axis and Allies fared better.  I'm not the best winner, but I also don't lose my cool and shoot myself in the foot either.  So I had that game with me when my boys came along and became old enough to play.  And play we did.  Over the years we accumulated many version of the A&A game (We find the Anniversary, Pacific and the Guadalcanal versions to be the best).  We've also branched out to other board games and war game.  Some on the extreme side of the complexity scale. More on that down the road..

Nonetheless, it's nice to return to the simple play of simpler times.  A few weeks ago, a couple of the boys were here while others were away.  It was raining - because of course it was.  My wife has been working on some projects, so one son decided to get the old original A&A up and play a round.  We did, and it was fun.  And nice.  It brought back memories, as this post demonstrates.  And it was quite enjoyable.

Alas, simplicity has its limits.  After the game, it was decided to get the anniversary version.  This time all the boys set aside time to play, and it went on for days.  My second and third son and me were the allies, being Britain, America and Russia respectfully.  My oldest and youngest - Germany/Italy and Japan respectfully - were the Axis.  Despite the apparent deficiency with having a twelve year old against three adults, the two held their own

For the record, the game ended when my oldest and youngest conceded after ten turns - a long game for A&A.  Both of them played quite well, and we were impressed with our youngest's tactical cleverness.  Though he did make a few blunders, including splitting the Japanese fleet early on.  Ironically that was a mistake the Japanese made in the early months of the war leading up to the disaster at Midway.

My two sons on my team kept the pressure on until they accumulated enough money to overwhelm the other two.  And, if I may, Russia (me) refused to die and kept Germany tied up through the game.  That's unusual because an A&A trope is that if Russia lasts more than five turns it's usually in Berlin.  So that was that.  A fun time overall.

Some good playing.  And some good memories old and new.

Posted by David Griffey at 8:08 AM