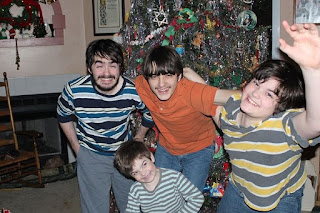 I have never done this before, though there have been times when help came our way.  For a long time I kept readers up with the string of ill fortune that continued to plague us as we made our way through conversion to the Catholic Church, even as the economy collapsed around us.  As a general rule, I posted those problems in the most vague manner possible, only a few times specifically saying what this or that problem was.  Over time, we've made progress, albeit at a snail's pace.  But it was enough progress to no longer feel the need to keep up to date with the latest issues.

Over the last few years we have been getting better, and things have improved.  We're slowing coming out of the pit we fell into when the economy collapsed, but only barely.  Enough not to revisit old laments.  But this time we have been hit just as we stood on the brink of almost getting ourselves back in the positive.

Our third son, while playing sports at a church picnic of all things, injured his leg.  Thankfully we don't think it will require surgery, but on top of a string of medical emergencies and household expenses and hospital bills stretching back to last autumn, it has pushed us over and onto the ledge of tumbling back down into the pit. My oldest son decided to put out a Go Fund Me page, and we updated it now since we - pray - that he won't need surgery.  Nonetheless, he's had to have MRIs, X-Rays, medical visits and doctor's visits, and with insurance being what it is, that means thousands of dollars out of pocket already.  Truth be told if he needs any physical therapy at all, the total cost easily will exceed the $5,000.00 mentioned.

So I'm doing what I've never done on this blog and asking for help.  Doesn't have to be much, even a single coin has music in it.  But feel free to share, spread the word, let others know, or whatever, about his Go Fund Me endeavor.  I realize that to some 5,000 just doesn't seem to be that much or worth the fuss.  But given the last ten years or so, it might as well be 5 million.  Plus it is the difference between finally coming out of the long crawl from the pit, and tumbling backwards to start all over again.

Thanks for any help you can.  Prayers are always appreciated, but in this case, financial help is as well.
Posted by David Griffey at 3:59 PM

Email ThisBlogThis!Share to TwitterShare to FacebookShare to Pinterest
Labels: Prayers, the Boys, The Family