Much has been made over the years about Google's little doodles.  Missing D-Day anniversaries or never mentioning anything about America's history.  Christmas or Easter distilled to little Easter eggs or a small elf in the corner, if that.  Other key days of significance to the West or America downplayed in kind, or ignored altogether.

When individuals are celebrated, nine times out of ten they are someone who is not European or Anglo-American, celebrating even the most obscure accomplishments you can imagine.  Or, in this case, celebrating nothing particular at all, just celebrating because: 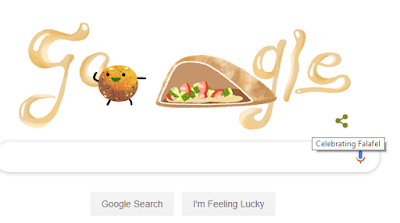 Wow.  I like falafel as much as the next person.  But given what Google routinely ignores or downplays, are we sure this is something that deserves preeminent focus?  Certainly on this day in history, something else was worth posting more than a celebration of falafel.

It's a reminder that Google is firmly entrenched in the modern Left.  And the modern Left is decidedly anti-God, anti-Christ, anti-West and anti-American.  To that end, those things associated with such subjects are at best diminished, at worst outright ignored.  Likewise, anything not associated with those, no matter how trivial, are open for recognition and celebration.

Of course I could be wrong, and Google will have hot dog or hamburger doodles, next to a celebration of various Founding Fathers and Christian saints.  Given Google's track record, however, I'm not holding my breath.

It's also worth noting that this not only impacts what doodles Google feels inclined to post, but likely impacts other aspects of Google's business decision making process.  Think on that for a few.
Posted by David Griffey at 8:34 AM