So the last part of this extended weekend (it began with celebrating my son's police training/Fathers Day the weekend before, hence part II last time), involved a visit to the underrated Ohio Historical Center.  I remember going there for field trips in elementary school.  Third grade, IIRC, was my first time.  Apart from a much smaller COSI (that's Center of Science and Industry to you), and the Columbus Zoo, the pickings were pretty slim in central Ohio.  I should mention that the Columbus Zoo in those days was one step above the kind you see in mall parking lots.  That was before the wizard of zooing, Jungle Jack Hannah, began his strategy of enduring the slings and arrows of David Letterman while using his celebrity to turn the CZ into the premier research zoo in America, if not the world.

Anyway, we went to the Historical Center because it was having a special Civil War reenactment.  I've said before that, unlike most history buffs in America, my interest in history didn't come from the Blue and the Grey.  Rather it began with a keen interest in WWII and evolved from there, never quite coming around to the war between the states. My interest in recent years is due to the Left's iconoclasm and destruction of the country via first taking out the Confederacy.  I've learned that if the Left says 'it was only about X (in this case slavery)', there's a 99.99% chance that it's far more complicated than that.

So on the advice of Donald McClarey at The American Catholic, I picked up a copy of Bruce Catton's, This Hallowed Ground. It's a nice primer for the Civil War for us CW novices.    Smoothly written in a narrative manner, it helps give a launching point for learning more about this misunderstood and grossly misrepresented time in our nation's past.

We had intended to split the day between the Columbus Museum of Art (which has free admission on Sundays), but my sister needed to bring my Mom home early, and so we adjusted and decided to make a day of it at the Historical Center.  I must say, the reenactment was beyond what we expected. Not to mention that Ohio Village (a replica village representing Ohio, c. mid-1800s), was much more interesting than I remember.  In some ways, it was far superior to our last disappointing visit to Colonial Williamsburg, where reenactors stood by with cell phones discussing the latest game, tour guides arrived in jeans and sweaters, and the emphasis was ever and only on the evils of slavery and Indian persecution (prompting my second oldest to quip how they could have had time for a revolution, what with beating slaves and murdering Indians around the clock).  If some of the museum displays had a certain 'shame on you' feel, the reenactment was far more balanced.  The climax battle was one of the best I've ever seen.

Without further ado, here are some pics from that last day of fun and, if we weren't too careful, learning:


Ohio's contribution to the field of paleontology.  That skeleton has stood there since I was my youngest's age.  Here he is, looking at it as I no doubt did all those years ago. 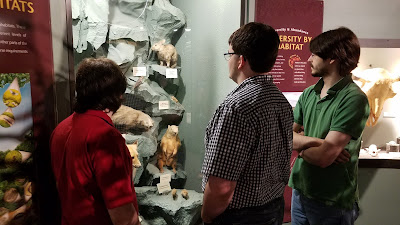 Here are the older three, gazing at some other Ohio wildlife.  I had no idea there are scorpions in Ohio.  It's enough we have bears and coyotes. 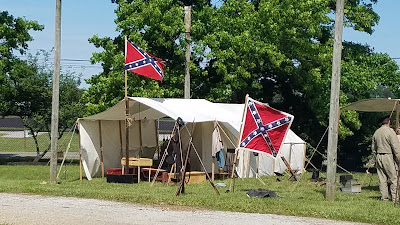 For no other reason than the flags.  I am of two minds about the flags.  I get why not having them as government displays could be appropriate, but I don't see it as a Swastika banner either.  It has it's place in our nation's past, and being Christian, that past and our assessment of it should include a sense of forgiveness and reconciliation that youngsters are being taught to ignore, if not downright hate.  Something a growing number of Christian leaders seem more than happy to ignore. 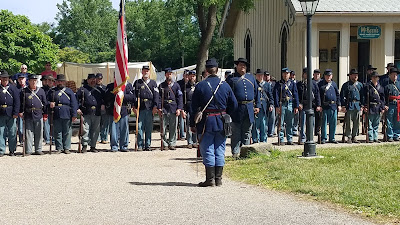 Early in the morning, they had drills and parades.  Here are the Union boys coming to formation.  We came to something like this when our oldest was only about seven.  It has grown much since then. 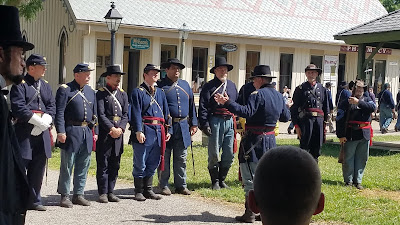 Another shot of some Union troops who have come forward away from the rest.  A familiar face stands to the side, overseeing the events. 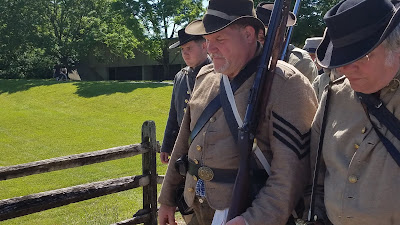 And yes, there were Confederates.  I just turned around as they marched by, so this was a quick, if not a bit closeup, shot of their much outnumbered forces. 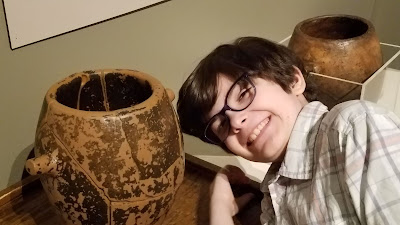 Our youngest loves mazes and puzzles.  This was a 'puzzle vase' that he put together.  The pride of accomplishment. 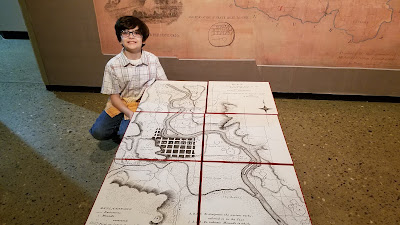 Another puzzle, this time being used to compare to the large map behind him.  A chance for some geography and history at the same time.  Always a good combination. 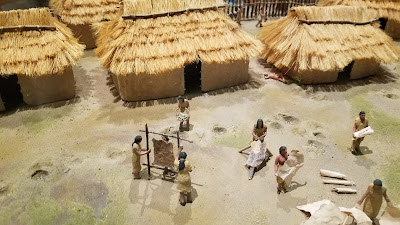 A scale miniature of prehistoric Indians.  I'm fine with the term Indian since the term Native American has come to represent much that I oppose, not the least of which is the idea that I have no claim to the term, despite being a native to America myself (I also don't like the intellectual dishonesty behind the term as currently used).  Nonetheless, I love the culture and studying the history of those tribes who lived here long before the first Europeans arrived.  I also love these miniature displays. 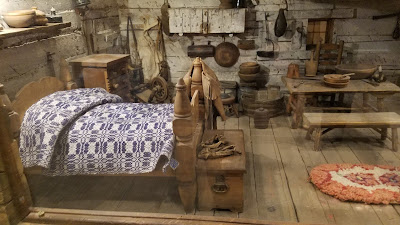 This is also a scale model, not a life sized replica.  It shows frontier living in the Ohio Valley.  Simplistic, but I'm increasingly convinced that for all industrialization has brought, we've lost much in the payoff.  I'm no romantic, and I'm happy to live on the leeward side of history where things like toilet paper are concerned, but it's almost impossible not to see that we're in danger of losing some significant aspects of being human in the process of gobbling up the latest, greatest tech product. 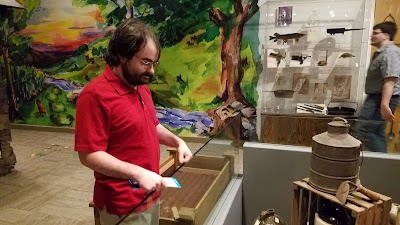 My oldest contemplates artifacts from a simpler time.  Again, no romantic here, but there is something to be said about homemade and hand crafted, as opposed to going all gaga over the latest smart phone that's a whole millimeter smaller than the last version. 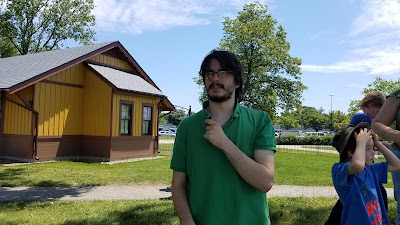 Our second oldest boy, looking a bit determined.  It was he who set aside a date with his girl to be with us this weekend.  Even as they move on, they make sure to spend time with us, and in the overall scheme of things, that's not bad. 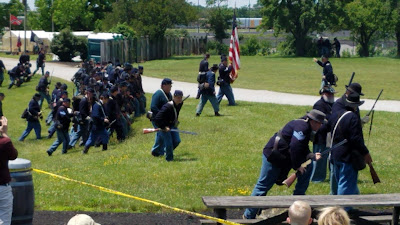 At 1:00 PM, the battle commenced.  Here the Union right moves up toward the village.  Apart from hand-to-hand, the battle did a good job reproducing massed volleys, skirmishes, ambush and town fighting.  There was even artillery, much to the shock and horror of all the little kids who let out a collective cry at the noise. 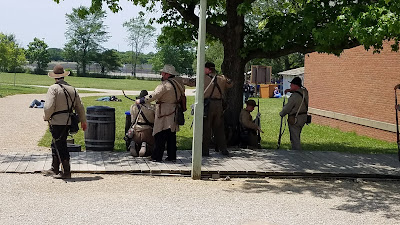 After the Union fell back, some Confederates moved forward, albeit cautiously, prepared to set up an ambush should the Union return - which it did. 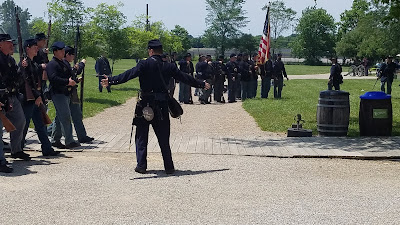 After recollecting themselves following the initial setback, the Union returned, chasing the South from their positions and back into the village, where they made a last stand across the village green.  The Union, FWIW, won the day. 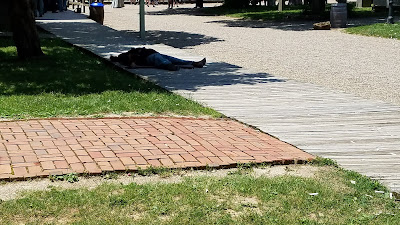 A casualty of war.  When he got up after it was older, my sons noted that it would be a happier world if all wars were fought this way, and those casualties could just stand up and laugh together when it was over.  But that is not the world we have. 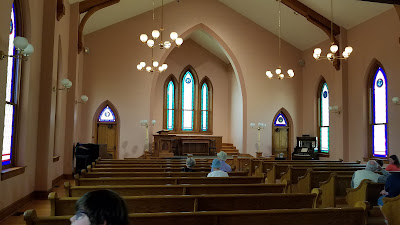 The rebuilt church at the end of the village.  A presentation was on tap, but we couldn't stay.  Inside, I told my wife that I confess I sometimes miss the simplicity and somberness of the old American Protestant tradition. Sometimes. 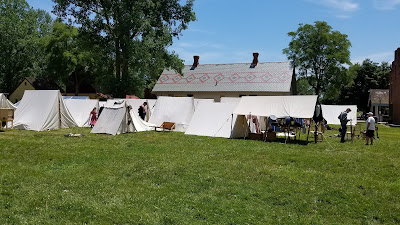 One of the encampments.  It was quite impressive, and again kudos to the reenactors for staying in character.  Nothing left us more crestfallen at Colonial Williamsburg than the large number (though not all, in fairness) of reenactors who acted like they couldn't wait to get back to the Ipad, or just went for broke and whipped out their smartphones just because.  But then, if the emphasis is on how horrible and evil was our country, you can't expect people to care how they represent it. 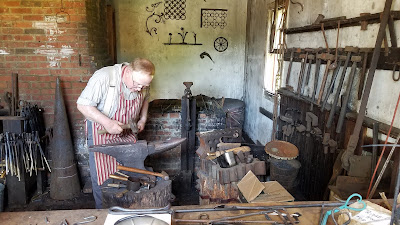 In any historical site, the craftsmen are always a draw.  The blacksmith is no different.  Unlike Williamsburg's, this fellow is part time.  Hence he doesn't have the 'blacksmith arms' we've seen before.  He did have some great cast products at some nice prices, but we just don't have anywhere to display such things. 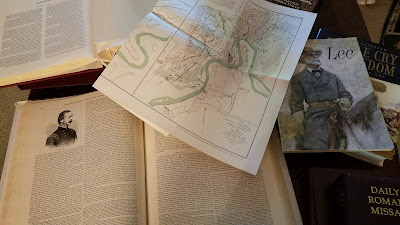 A final treat.  On our way back, one of the tents was selling things, from costumes and paraphernalia to books.  The woman selling the books wanted them gone, and was selling them for a song.  We had to leave to get home in time, so didn't have time to work things out beyond what we could carry.  Had I had the time, or had a wagon, I would have bought the whole collection.  These are a few we bought - and the whole haul set us back $7.00 dollars total.  Prices were 2.00 for hardbound, 1.00 for paper backs.  For 50.00, I could have had it all - five shelves worth.

So that was that.  Two weekends woven loosely together, and much time with the boys.  Even as they live at home for cutting expenses and, to be honest, a variation on our own version of The Benedict Option (more on that later), their schedules and obligations and socializing takes them more and more away, as it should be.

Nonetheless, they still make time for the family, and for their youngest brother.  If I had nothing else to be thankful for, I would have them and what they bring to the family.  Someday they will be on their own, and that's where the character hits the fan.  But if they continue on as they are, hopefully they'll bring such devotion to their own families and maybe, just maybe, a world around them that so desperately needs such character and grounded values.
Posted by David Griffey at 9:43 AM