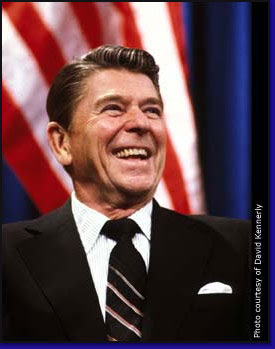 I may post more later.  But Reagan defined the era in which I came of age.  I'm old enough to remember the national malaise that we had c. 1979.  There was just no real hope.  Things were unraveling, the world was laughing at us, our economy was collapsing, and many young people were turning to the sex and drugs disco culture as the way of coping.  When Reagan was elected, the Left pounced.  Particularly vicious was the younger press, those Baby Boomer ex-hippies who now held microphones and wrote articles for key publications.  He was a B-movie actor who made films with chimps.  He was a brain dead, senile cowboy.  He was a right wing warmonger of the Goldwater variety.  He would nuke the world!
Everything he did was criticized.  Even when he was shot, I remember the pre-cable news world allowed discussions by individuals questioning the way in which he was recovering.  Jelly beans on his desk?  Yelling at reporters and telling them to shut up?  Why, he probably didn't even know where the Falkland Islands were!  And when he called the USSR the evil empire?  Wow, that was it.  We were all going to die.  And his policies in Europe and missile defense were sure to lead to the cataclysmic end of civilization.  So sure were those on the Left of this scenario that they released a special TV movie, complete with weeks of discussions liking it to Reagan's policies, called The Day After.

And yet, by the mid-80s, it was clear to anyone that things were better.  I'm not saying Reagan was right about everything.  Most in my family were Democrats, and while some voted for him, none supported him in everything.  But then, in those days, those who didn't vote for him still found things they liked about him.  They didn't feel that to disagree with someone politically was to hate them.  Still, despite any criticisms, and despite the popular culture's insistence that our economic doom or death by nuclear annihilation was just around the corner, by 1985 we could see the light at the end of the tunnel.  Things were better.  America was standing strong. Things were improving.  We had pride once again.  And while the Bruce Springsteens of the nation would continue to fuss about Reagan, suggesting it was wrong for Reagan to claim he had a monopoly on patriotism though Reagan never really made the claim, it was clear he had done what his critics imagined would never happen.
And for that, I thank him.  For all the problems, short comings, bad decisions, and failures that are common to all who take up the mantle of worldly leadership, he brought an optimism and a hope to our country that was not there in the late 70s, as I began to move into the world of young adulthood.  There would be problems, worries, and concerns as there are in any era.  But at that crucial time in my life during the mid-80s, we believed there was hope.  Something five years earlier so few believed could ever happen again.  And so for the good memories, the happier times, the bountiful prosperity that even the critics were happy to enjoy, thanks for the good times.  Happy Birthday Mr. Reagan, may you rest in the peace of our Lord.
Posted by David Griffey at 3:32 PM