Here's a snapshot of what greeted me on a newsfeed this morning as I was checking out the world around me: 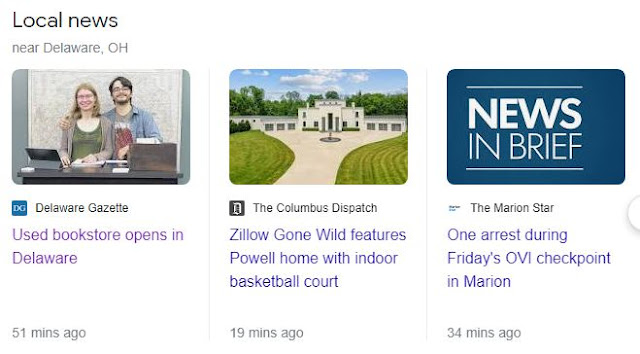 How about that!  That's in the local paper, you can read it here.   In addition to that, they're scheduled for a segment this coming week with the central Ohio ABC affiliate, Channel 6 Columbus.

I'll admit their first month far exceeded our expectations. Not that we didn't support them, but I've seen a lot of businesses come and go over the years.  I was involved in a business start ages ago before we imagined a President Bill Clinton.  I'd say I didn't learn how to open a business as much as how not to open a business.

Nonetheless, they've scratched, kicked, clawed and bit their way into opening their doors, often getting as much for as little as possible.  Much of their inventory has been donated.  Their décor and furnishings come from garage sales and discount venues.  In some cases, the furnishings have been from donations as well.  This includes whatever promotional and marketing materials they can muster for a few pennies here and there.

From what I've seen in reviews and scuttlebutt, their store has been well received.  People like the atmosphere and the general feel of the place.  It doesn't hurt that theirs is about the only functioning brick and mortar book store between the north of Columbus and Lake Erie.

Patrons also seem to like the two of them. Based on the general reception, people appear to smile and enjoy their spunk.  Things aren't great in our old world, including here in the US of A.  Try as they might, the national press can't make things wonderful when people's lives say different.

Because of this, people appreciate their optimism and attempt to chase that dream, even as so many dreams are dashed in our crazy age.  At a time when businesses struggle, when the economy lags, when inflation soars, when society itself appears to be teetering, here you have two engaged kids leaping out and saying 'We can do it!'.  Something about that boundless enthusiasm in this day and age has injected a little positive into a time of so many negatives.

In any event, like any football coach will tell you, the minute you win today's game you begin planning for next week's game.  This is this month, soon to be ancient history.  They have a thousand months to go.  This month was good, better than expected.  Now we have next month, and the one after that.  May they turn out as well or better for them than their first month's foray into the world of entrepreneurship.

Posted by David Griffey at 8:22 AM