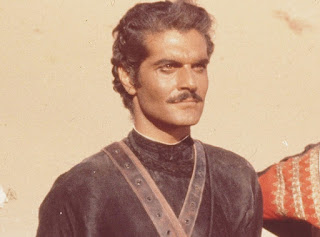 Yesterday the news broke that Omar Sharif died.  It is said that Peter O'Toole once quipped that Omar Sharif is simply too cool a name for anyone to have.  He was right.  Yet the name fit the actor.  Sharif exploded onto the world stage in David Lean's epic Lawrence of Arabia.  He played Sharif Ali, perhaps the most complex and interesting character in the entire movie.  And he did it, as the youngsters would say, with swag.  He starred in another Lean masterpiece, the somewhat difficult to pinpoint Doctor Zhivago.  He would appear over the decades in a variety of roles.   But for most, he will forever be the good doctor and the wonderfully awesome Sharif Ali.  May God grant him peace and eternal rest, and to those who loved him and the many who will miss him.
Posted by David Griffey at 12:17 PM