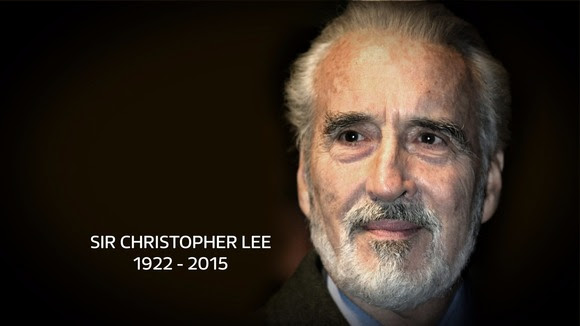 A major part of my childhood just passed.  Growing up, Christopher Lee was, to me, as big as Elvis or Sinatra or James Dean.  He was iconic. I remember seeing old Movie Monster magazines with photos of Mr. Lee, thinking that the photographer must have been some sort of awesome to have the chance to photograph 'The Man.'


Of course as I grew up, I realized that particular place that Christopher Lee occupied in the overall cinematic canon.  Nonetheless, he was never entirely outside the main stream of cool.  And each decade, he seemed to manage to put a foot in the latest currents of popular culture.  Most youngsters who know his name at all will know him from The Lord of the Rings or the unfortunate Star Wars prequels.

And yet he was so much more.  A genuine Renaissance man, he spoke more languages than I have coffee cups.  He was a war veteran, a capable singer, a lover of literature, and what's more, a bona fide Tolkien fan.  In fact, he claims to have made it a point to read Lord of the Rings every year (beginning in September, of course).

But now the world is a bit less interesting.  Not that it was a surprise or a shock.  It's almost not even sad, for such a rich, celebrated and joyful life to have moved onto the next realm.  May he experience a small part of the joy he brought to many like me.  And may he not have to endure too much of his eternity with his dear friend Peter Cushing, who will always be able to gloat that he was in the classic, not the catastrophe.

Posted by David Griffey at 9:10 PM