Who not to trust on the Internet

So this came to my attention, from Mark Shea's Twitter page: 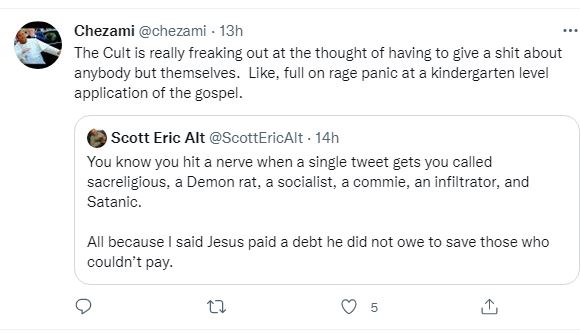 So that we know it's not some strange thing Scott Eric Alt pulled out of the air - the equating Biden's student loan debt proposal to the Gospel  message - can be seen here:

And just to make sure it's not all about equating policy to religion, we have a bold activist stating that as one who paid off his debts, he's thrilled that people's lives will be forever changed by Biden's actions. Apparently there will be no negative side effects because, well, none of these brilliant commenters seem aware that there is anything but perfection with Biden's proposal:

There is much that is obviously wrong with all this.  The equating of a dashed off political policy to the Gospel is something right wing Christians were once accused of doing.  And if they did it, it was wrong.  As it is wrong now.  But the point is, all they are doing is defending Biden.  That's what all of this is about.  Nothing more, nothing less.  Everything else is irrelevant.

That they elevated a controversial - from all sides - policy to the equivalent of the Christian message shows why they shouldn't be trusted to speak to things of the Faith.  That they clearly don't care about who might be hurt by this shows why none of them should be listened to regarding the needs of the hurting.  That they seem oblivious to the many criticisms of Biden's proposal from all sides shows why they shouldn't be listened to about politics.

Facts, data, context, and basic mature and reasoned approach to the subject are as far from these posts as east is from the west.  Which is why, unless you conform to their particular brand of same-think, they probably shouldn't be listened to at all.

Oh, and have I mentioned I wouldn't do Twitter if my life depended on it?  If you need a reason, just look at the sampling above.  I could get better from kindergarteners on a playground.