That philosophy has certainly developed over the years in our house.  We always enjoyed the odd game or two with the family, but it became especially true over the Covid lockdowns of 2020 and early 2021.  Naturally, even with the older boys doing their Bed and Breakfast strategy over the last year, we don't play games as a family the way we used to.

Despite all of this, the boys still try to get one day a week for the family.  Unless some school or work obligation bears down on them, they will set aside one day to be with the family as a whole.  My third son, manager though he is, has  pulled what strings he can to get as many Sundays off as possible to be together for church as well as that day of rest.  And, in our case, fun.

Now fun often has to manifest itself in many different ways.  Sometimes a movie we've traditionally watched every year.  Or a holiday special.  Or a big feast for the season. But when those are scarce, and the weather angry, the boys will pull out what games they can and we'll sit around the table and play..

So what games are the ones we've played the most over the years?  Granted, different ones of us have at different times enjoyed this or that game.  Sometimes if a few were around we might play a different game that has fewer players.  And the boys have the games they play when they can.

I'm talking here about the games we've played over the years as a whole family.  The ones that allow all six of us to play (five before our youngest, but six since).  The standbys.  The old faithfuls.  Here are the main ones, in no particular order, that all six of us have enjoyed as a family through the years: 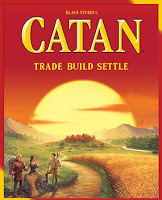 Catan - First prize would have to go to this gem.   I picked it up years ago at Barnes and Noble.  I knew nothing of it.  Just something to get for Christmas.  It's only for four people, but with an expansion can include six.  The premise is that you're settling a new land and have to build up resources, settlements, cities, and fend off other players doing the same.  It's not a quick game, but not terribly long.  I can't imagine trying to count the times we've played this over the years.  It's our go-to game.  When we have enough time, but not too much.  Everyone, including our youngest, gets it.  True, he has yet to win, but he's come close a couple times. (he just won as this was being written)  Against five adults who don't pull too many punches, that's not bad.

Eldritch Horror - I already wrote about this here.  Suffice to say, it's giving even Catan a run for the money.

Poker - deal me in or deal me out.  I often regale the boys about the days of my youth.  My best friend had a mom who everyone liked.  She was Lithuanian, quirky, and always hospitable. Naturally, his house became 'the house' at which to hang out.  Among the pastimes would be games, usually cards. 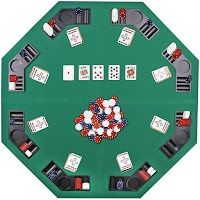 Sometimes RISK was the game.  But often it was poker.  By late high school and early college, we would play for hours into the night.  Sometimes all the way through to the morning.  Different friends would come in and out.  Some would bring snacks and drinks.  Sometimes his mom would make sandwiches or snacks.  Friends would play for a time and leave only to be replaced by someone else.  I called those our 'deal me out' nights.  I think the boys like capturing a bit of that when we play, and it's also a nice, relaxing game.  There's something about a round of poker (no money) with sandwiches and snacks that just captures the right aesthetic for us.

Apples to Apples - we've possibly played this game as much as any other game ever.  It takes no time to play, set up, or win.   One person puts down a card with a word on it, and everyone else tries to put down cards that have people, places or other things that are closest to representing that word.  We all take our turn as the one to judge the other cards.  For such a simple premise, it has yielded as many laughs as any other game we play.

Dungeons and Dragons - can you believe it?  When it was the raging fad of the day in my high school years, I barely noticed it.  Now?  It's my sons' love for fantasy and sci-fi, born of their coming of age when The Lord of the Rings, Harry Potter, and Marvel were the cultural backdrop of their world, that tipped the scales.   They even have me be the referee; the one who knows very little about science fiction or fantasy beyond Tolkien, Star Wars, and my wife's love for Star Trek, and next to nothing about RPGs in general except what I read.  Nonetheless, my boys say I don't do badly, and compared to other RPG games they've seen or played, I run a strangely sedate game that almost never has anything happen, and yet has all the more tension because of it.  In fact, they believe my ignorance of the overall fantasy/sci-fi genres actually makes the game better.  I'll take their word. For my part, I enjoy reading the old books I got in my youth but didn't use, and trying to make something with a semblance of logic and consistency out of the mess.

Fief - In terms of capturing 'the spirit' of a game's theme, I'd have to say Fief does the job about as well as any. The setting is medieval France, with each player trying to seize land, titles and wealth in order to buy himself the throne or even the papacy.  Plenty of  backstabbing in this one.  Some of it might go over our youngest's head.  But what he lacks in the nuances of grand strategies, he makes up for with a bulldog tenacity that won't let go when he believes he's been scorned.  Basically we wait for someone to do something to him, then take comfort in knowing that person will have our youngest around his neck for the rest of the game.

Shadows over Camelot - another 'themed' game, the source being obvious.  It's a strange mishmash of rules and play, but it gets the source inspiration right. Perhaps it's the art or the overall quality of the product, but it does evoke a bit of the Arthurian, and for a game based on the same, that's not bad.  It isn't terribly difficult to figure out.  On top of it all, it's more of a cooperative game.  Yes, there's the token traitor who becomes the 'him against us' of the game.  But we figure there is only a one in six chance of our youngest drawing that.  Most of the time he's part of the team.  Though he has a nasty tendency of acting like the traitor and therefore throwing everyone off.  Something that has enraged more than one of my sons over the years.

Monopoly - this game gets a lot of grief in modern times.  Some call it the worst game ever.  I think that's a bit harsh.  True, luck plays a major roll in the game.  You can make some decisions here or there, but they are going to be filtered down through luck of the dice.  Still, it's so well known and easily played, it's a great way to pass time and enjoy fellowship.  We don't have to stop and ponder complex rules.  We roll, we buy, we pay, and we visit.  That last part is worth its weight in hotels.

Dungeon - I remember seeing this at a friend's house back in the day.  I thought it was a board game version of the more popular D&D. I was surprised to find out some years ago that it was actually a precursor to the cultural fad that was Dungeons and Dragons.  Truth be told, it seems D&D lite, and it's often our youngest who likes this, since it is simple and doesn't take too long.  The older ones can be a bit competitive with things, and sometimes they've made it into a sort of Vegas style Dungeon game.  But in the end, it's one that everyone gets and can play largely on the same level.  Trying to balance five adults with a youngster who is almost ten years off the rest is an important consideration in our most popular games. 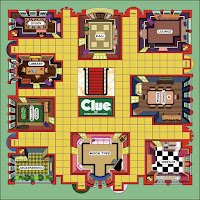 Clue - an oldie but a goodie.  Like Apples to Apples, it's for those times when we are in a crunch.  Maybe a movie, maybe something else; perhaps a cookout with some time left over.  Inevitably someone says let's play a game.  Not enough time for anything else, so it's whip out the Clue board and avenge Mr. Body.  I don't know that I've ever won this.  I get that it should be simple, but my mind doesn't work in a way that can outpace the others, who have all won at least once I believe.

Those are the biggies.  There are others of course.  And this list doesn't include the myriad four and five player games, or chess, or various two player games, or the more 'hobby' focused ones that might include more than five, but my wife often sits out.  That would be games like wargames or Emprise in Arms and such.  These are the family times, the ones we hold until everyone is here.  It's far less common now than in years past.

Posted by David Griffey at 5:01 AM

Email ThisBlogThis!Share to TwitterShare to FacebookShare to Pinterest
Labels: Fun stuff, The Family