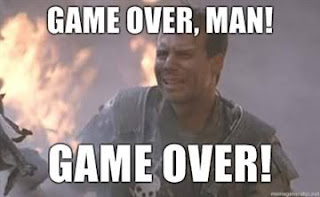 Game over! To quote the ever bleating Hudson from the excellent sci-fi sequel Aliens.  And I'm not talking about anything to do with Covid-19.  At least directly.  Basically, the game Empires in Arms that I began with my boys years ago has come to a close.  With them being home due to the Covid-19 shut downs, we've had extra time.

Called a flawed classic, Empires in Arms suffered from one obvious flaw: it took forever to play, and is best executed by as many players as possible.  Seven is the max, though the seventh would play the inferior Spain, and so six or five will do.  Getting that many together to play for such a long period of time was as likely as finding Bigfoot.  I played it once for a bit in college with six players.  This time the three oldest sons jumped in and we began to play when they were in high school/middle school.

Then things in life sped up, and at times months went by between sessions as they got older.  I know.  It's hard to believe they would rather be with friends or go out with girls than play a war game in the basement with their Dad.  Nonetheless, they still made time out for it when they could, and so we got a session in now and then over the last couple years.

Then it picked up greatly these last few weeks.  As a result, we were able to move forward by leaps and bounds until Wednesday night, when things finally came to a head.  My oldest, and likely more cautious by nature, had drawn France to play.  He probably wasn't the one to match the catch-me-if-you-can attitude of Napoleon.  More worried about avoiding a loss than seizing a gain, he often was outmatched by my third son and me, playing Russia and England respectfully.

Finally, feeling he was slipping behind his brother who had Russia, he unwisely declared war, and subsequently suffered a string of defeats.  In EiA, that translates to political losses at home, which further translates into Victory Points.  He had already lost Napoleon to England from a previous coalition.  My third son's aggressive style, mixed with England's willingness to funnel unlimited finances into Russia's coffers, allowed him and me to seize most of France.

Then my oldest did what he does in these games when faced with a dire situation: he made a strange, nonsensical maneuver.  He sent his best cavalry officer (Murat) along with one of his strongest forces to besiege Naples.  For no apparent reason.  Meanwhile he allowed what was left of his fleet to get bottled up.  My second son, playing Austria, decided it was time to extort territories from my oldest's diminishing holdings under threat of joining the war.


At that point, we realized two things.  First, Russia would likely win at this point, even if the game still had a few years left (a few dozen turns).  Second, we probably would have to pull punches and do what we could to keep our oldest in the game, which doesn't work well in a game centered around defeating Napoleon.  So, after all these years, we decided it was time to pull the plug.

They've talked about starting another game of it.  We'll see.  Right now, they have some time, though their college classes are a bit crazy since most were not designed to be online.  My two middle sons are also 'essential workers' in that they work in the grocery and food industries.  We're careful since on one hand they are essential, but on the other hand they aren't quite getting the love that the medical pros are when it comes to protection and even free perks.  Not many have said grocery workers will receive free gas or food.  Even their own stores haven't.

So they are still busy.  Once this settles when it settles, then they'll be back to normal, and probably more, since they'll be scrambling to make up for lost time.  But either way, it's been a fun time and a pleasant time.  I've appreciated the boys taking time out of their schedules over the years to keep the game going.  As they do with their youngest brother, so they did with ol'Dad.  And that's not bad, even if I didn't win.
Posted by David Griffey at 3:01 PM