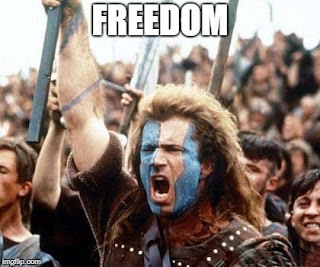 To the growing push back against encroachments on liberty and freedom in the Covid-19 era.  He
has a point.  To a point.  Grandstanding and using God to make political points isn't right.  Likewise, caring more about fishing or going to the ballgame than the health and well-being of our neighbors isn't Christian.  I do believe that caring for others and looking out for those most vulnerable is a noble and Christian ideal.

With that said, it's not hard to see that while there are extremes on the much mocked "Freedom!" side, there is also a growing abuse on the other.   While concern about our neighbors is a noble venture, and there's nothing wrong with being concerned about our own health, exploiting those things because we're scared of losing our life more than anything in the world isn't noble or Christian.

The sudden silence across much of the modern Left regarding the plight of the poor in this time is telling.  Oh, the press mentions it in the vaguest terms.  We hear people say how it's a shame.  But if the progressive narrative that poverty leads to death has any merit, then all we're doing is kicking death and suffering down the road in order to stop this now.

Those who poopoo the idea that any freedom or liberty matters, for whatever reason they would do so, are selling birthrights for bowls of stew.  It's proof that we live in an era so spoiled by unrestrained freedom, and perhaps injected with some generational arrogance, that we can't imagine losing our freedoms, or think of what that would mean if it happened.

So yes.  Those saying they don't care, they want their ballgames and fishing trips whatever else be damned, are not right. But those who have said there is nothing but Covid-19, and they will sell anyone and anything to save ourselves - even if it means the deaths and suffering of millions of others down the road who had to suffer that we might live - are no better.  They might be worse.

I'll leave you with this. A seminary professor of mine once said that those who don't worry about losing their freedoms are those who have never lived without them.  After all, losing your freedom isn't like getting a bad haircut.  If you decide you don't like it, it won't just grow back.
Posted by David Griffey at 8:05 AM

Email ThisBlogThis!Share to TwitterShare to FacebookShare to Pinterest
Labels: Catholics and the Internet, Current Events