It looks like a time in which Christians poopoo the idea that God has anything to do with the spread of Covid-19, or even its cure, but the current pope joins millions in suggesting that the pandemic is instead the result of Nature sending us signs and wonders.  It's a model of the universe in which everything is material with material explanations, where Nature becomes a cognitive force for us to appease - and when that doesn't work, then God.

I've been coming to the realization that we live in a secular age.  Agnosticism is the civil religion of our time, and secularism is the model through which we understand reality.  I've also realized that, like it or not, many Christians - especially in the dying West - are as secular, if not more, than they are Christian.  Oh, there's God and miracles and prayer and demons and angels and all.  On Sundays.  Or when someone is sick or we need a job promotion.  When push comes to shove, however, when it all hits the fan, many Christians today sound no different than the unbelievers, the atheists and the secularists we attend ballgames with or who work next to us Monday through Friday. 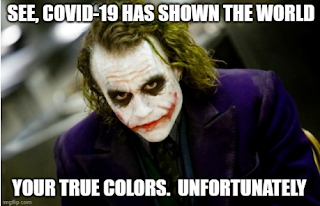 Our response to the Covid-19 pandemic has, in many ways, shown modern atheists just how secular Christians are.  Christians have no problem dismissing religious services, church, sacraments and anything else.  Oh, there's a ton of theology and precedent.  People run about saying that churches have closed in the past, and people often don't get the sacraments, and you can get to God pinned under a car on a back road as easily as in a worship service.

But most people know better.  What we've done isn't because of some deep, theological reflection.  This is because Christians were scared.  Scared to lose their lives as much as the atheists.  And, quite frankly, scared to look like some ignorant yokels clinging to their fairy tales about miracles and angels and demons when everyone knows it's science and medicine that call the shots.  God have anything to do with this?  Bah.  It's nature, son.  It's viruses and vaccinations and PPE that are the real deal.  We live in a material universe, a material world with material answers to material problems.  Perhaps when that's all said and done, then maybe God stuff.  But we know the deal.  We know what this author at Freethought realized:


Wash your hands or say a prayer? Social distancing or Sunday mass? Cancel public events or give out coronavirus communion wafers to the credulous?

Many believers face these choices as the coronavirus spreads. There is no religious response to the pandemic, unless we count abandoning religious rules in favor of science and medicine. Faced with these choices, most people accept that religion is pointless, at best, and harmful, at worst. Most are making decisions that appear to be motivated by science and medicine, not scripture and sacred doctrine.

Yep.  For all the world to see.  Covid-19 has shown modern Christianity's true colors.  We no more believe there is anything holy about water than the skeptic believes.  We no more believe that being together in a church service has any objective benefit than the None believes.   We no more believe that sacraments are something we have to have than an atheist believes.  Sure, nobody - including the most frothing cynic - would say Christians should do nothing, or that Christians have no business trying to stay alive.  As Billy Graham used to say, he believed he would go to heaven when he died, but he didn't want to get there from an airplane.   Likewise doing what we can for those most vulnerable is a fine demonstration of loving your neighbor.

With that said, this isn't what happened.  Christians have shown no balance in this.  We caved in every way we could cave to a secular model of a secular age, and then tried to spread a ton of theological manure on our actions in the hopes that something beautiful will grow.  It won't.  Not just with the unbeliever.  It will not work with those faithful who have been suppressing, or entertaining, doubts for years.  I fear in the months and years to come, they will doubt no more.
Posted by David Griffey at 10:59 AM

Email ThisBlogThis!Share to TwitterShare to FacebookShare to Pinterest
Labels: Post-Christian Values, Religion in the World, The Secular Church