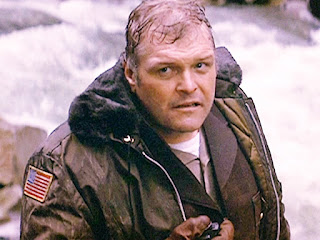 I just learned that Brian Dennehy passed.  That is sad news.  Mr. Dennehy was someone who seemed to be everywhere when I was growing up.  Equally adept at playing comedy, villains or good guys, he just seemed to love the camera.  And the feeling was mutual.

A massive man, at 6' 3" and the size of an NFL center, he just dominated whenever he was on the screen.  Even if he was never cut out to be  a leading man, there were few leading men who could hold their own when they shared the screen with Dennehy.  Even against someone like Sylvester Stallone in First Blood, he almost out-shined a character meant to outshine them all.  It's also worth noting that, accordingly Stallone, Dennehy (an actual vet) ironically schooled Stallone on some finer points of being a veteran.

My first experience with him was a short lived sitcom called Star of the Family.  It didn't last long.  I don't think it made it through the first season.  I only remember watching it because the girl on the show was cute.  Nonetheless, I also remember thinking that there was something about the fellow who played the dad.  He had a charisma, a strange magnetism despite the fact that he was built like an armoire.

And that was Dennehy.  In later years, he stepped out of movies, citing a dislike for the way movies were being made.  For those who had the chance, they say he became quite the staple of theater, and found new respect and accolades as a thespian in that realm.

Nonetheless, for me, I remember him as a sort of later day Charles Durning.  He was better as a support actor than a star, but when he was there, he dominated the shot.   I always liked him and he always seemed to play parts that demanded a certain level of respect.  Perhaps it's because, as he said, he played heroes like they were villains, and villains like they were heroes.

In any event, he will be missed. RIP and God bless and keep those loved ones he left behind.
Posted by David Griffey at 8:21 AM