When memes are true

I'm not a big fan of memes, at least for commentary purposes.  For humor they do just fine.  But when trying to make a point, they are like late night comedians on acid.  They can often ignore mountains of facts to score a false point, often with contempt and smugness.  Nonetheless, sometimes they score.  I guess broken clocks and all.  This would be one: 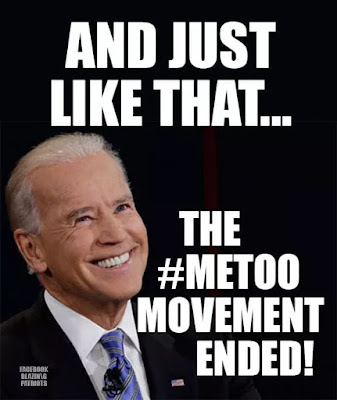 The Left has played two great trump cards that have entered into our bloodstream and show the decadence and wickedness of the Left's America.

First is the here today/gone later today approach to principles.  Censorship, judging based on skin color, sexism, judgmentalism, proselytizing, imposing values on others, violence when opposing unacceptable opinions - why the list goes on and on of things the Left once called good it now calls evil, and vice versa.  That makes it a tough nut to crack.  Operating on the ideal of perpetual progress, it's free to insist the old ideas are inferior by virtue of being old, and change them on a daily basis when convenient.  Even if those ideals are days old.  Imagine playing a game with someone who changes the rules on turn by turn basis.

The second is no less bad, if not worse: exploiting and caring about the suffering of human beings and the least of these only when convenient.  You can see this in the sudden dismissal of the plight of the poor during our extreme measures used to fight Covid-19.  You can see it in the silence  when racist or sexist rhetoric is aimed at people who dare stray from the Left's reservation.  You can see it in the dropping like a hot potato of people, like Jazmine Barnes, when it turns out a young black girl was in fact murdered by two blacks involved in a drug deal rather than a white racist in a pickup truck with a MAGA bumper sticker.  You can see it now in the Left's naked reshuffling and repackaging of the #MeToo Movement's radical feminism and sexism now that such is baneful to the Left's purposes.

There should be three fundamental laws when it comes to understanding the modern progressive movement that every American needs to realize and confess: 1) The press is dead and is now a propaganda organ for the secular Left; 2) the Left has no core principles beyond the acquisition of power; and finally 3) the Left doesn't give a rip about the poor, the minority, the woman, or anyone but that it can exploit their plight for gain.  And again, it isn't that these things are unique to the Left or any group in history.  It's that with the Left's monopoly of culture, media and education, these terrible things are becoming the acceptable norm.  The norm, that is, when it benefits the Left.

If you don't realize these things, then you belong to the ignorant masses of history that all too often become the enablers of history's great tragedies and evils.  Be warned.
Posted by David Griffey at 9:09 AM

Email ThisBlogThis!Share to TwitterShare to FacebookShare to Pinterest
Labels: End of Liberty, Post Modern Values, Punditry over Principle, The evil the Left does