It's not that Black Lives Matter

It's that no lives matter until black lives do. On a more serious note,  my old Patheos editor Sam Rocha takes it to the next level by echoing the latest development in the 'judge by skin color, not content of character' movement.  Now no life matters - hear that oh sons of mine - until black lives matter.  And when and what that means means nothing since, like most things of postmodernity, there is no end game or goal or measurable outcome.  There is a slogan to be used to pummel, pummel, and pummel again.

By the lack of clear finish lines and goals, combined with Sam's statement, my sons' lives may never matter again.  Or his life may not matter. Or even black lives may not matter? Who knows except what we all know which is always nothing ever.  And while we don't know, the goalposts continue to be moved.

Note, however, how he easily weaves in and out of 'it's all sooooo complex' to stating his position about BLM with all the uncertainty of a Waco tent meeting. That's a trick my sons have noticed.  They saw it most recently in our neck of the woods when a police officer shot and killed a teenager who was attacking another girl with a knife.

They noticed that now the debate is over when a knife fight is OK, when it isn't, when wielding a knife and attacking someone might make you the victim, why police should have comprehensive knowledge of all people involved before reacting, and basically how we can ever know if C-A-T really doesn't spell DOG.

The important point isn't finding an answer, but keeping things in perpetual question mode.  Keep things jumping, hopping, and confusing.  Insist everything is always except for when it isn't until it's never which is yes no.  And that way, amidst the confusion, you can then plow forward - as Sam does - with the gospel of BLM, racial profiling, and guilt by group identity, ethnic liability, national origins and what have you.  In fact, so sure is he in pushing BLM that, compared to all the 'it's all so nuanced' filling his post, you can't help but pay some level of attention when he makes such dogmatic statements.

Which, my boys imagine, is the point.  Complexity when convenient, surrounding a juggernaut of dogmatic utterances that would make a Nuremberg speech seem nuanced by comparison.  That is one of modernity's neatest tricks.  It's how we went from a post-war liberalism that said violence is never the answer, to a 2020 insistence that those innocent killed by the BLM riots were sad, but necessary collateral damage for the greater cause.  Or the national 2021 debate about when trying to stab someone to death makes one the victim.

There are so many other things wrong with this post.  It's sort of a condensed 'everything wrong with the modern left in one post' publication.  Such as Sam's easy dismissal of the lives ruined and incomes  lost from last year's riots.  Sam points out that so horrible has been the terror visited on black Americans for the last four hundreds years by all the racist whites in this racist nation, that they could riot and destroy (and perhaps kill?) for decades and it would never make up the balance.  Again, you heard liberals say violence is never the answer, but the Left now says that it can be a beautiful thing when executed for the leftist cause.

It's enough for my post, however, that his appeal to circular dogmatic nuance is why things like this, meme though it is: 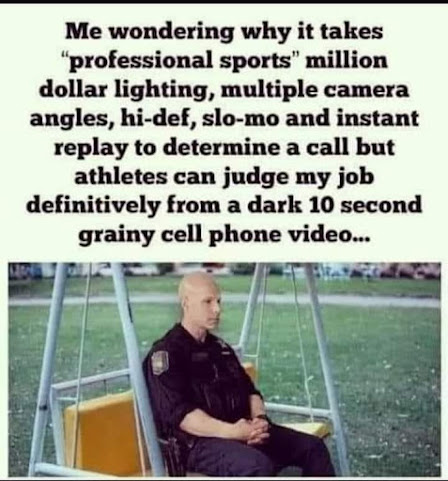 Fall on deaf ears. It's a perfectly sane and valid point.  Why have our highest paid professionals concluded that a few seconds of often edited, fuzzy and shaky videos is enough to execute judgment, when we watch same highest paid professionals spend endless amounts of time examining the  most sophisticated and expensive motion picture capture before arriving at a conclusion?  In a sane and mature world not polluted by lies and foolishness, that is a valid point. But in a world of 'it's so complex let's charge forth with new morals that are right this time', it is, sadly, a waste of breath and ink.

Email ThisBlogThis!Share to TwitterShare to FacebookShare to Pinterest
Labels: Post Modernity, The New Racism and the Catholic Left