On one hand, those who remember this:

On the other, those who reflect this:

Yes, I know.  Call them out and they'll be indignant that we suggest they no longer care.  They'll then insist they do.  I've noticed that's a tactic when calling out the modern Left.  Often their lack of concern is demonstrated by their general lack of concern.  But calling that out never does any good since they can then insist, for the umpteenth time, that they obviously do care, pay tribute, etc.

I'm old enough to remember when across St. Blogs, Memorial Day was a time when so many Catholics I followed remembered the fallen, paid tribute to our nation and its heroes, and called upon us to reflect on our blessings as Americans.  This year I decided to look around at some old blogs and bloggers I've followed, or used to follow, over the years.  Not ones I started following over the last couple years, but ones that are still around who were around when I first visited the Catholic blogosphere, and in the first few years of my life as a Catholic.

Of those I checked, only this at The American Catholic had any clear reference to the holiday.  There were actually some other posts on TAC as well paying tribute at this time of year.  And this, of all places at Mark Shea's new blog.  But that was it.  Of the Catholic blogs I discovered in my early day, of those still running in some form or another, that was the only one to mention or reference Memorial Day.

I even found some Catholics on Twitter.  I don't do Twitter myself, but I see people keep up with Twitter and can access it that way.  Of those Catholics I know of from the olden days who Tweet, I found not a single reference to Memorial Day.

That is not a coincidence.  The country that those we remember at  this time of year is under assault and, quite frankly, losing.  The move to destroy the US and the Western Tradition is well under way.  Those Catholics who would stand with Ms. Harris are the ones happy to join in the destruction of America and the West, including traditional, historic orthodox Christianity.  They will accept any loony BS and sanctify it, turning a blind eye to the problems, using any trick in the book to deflect from the obvious.

If you call them out, sure they'll say they weep with those in the top picture.  But at this point, you'd have to call them out.  Say nothing, and I can almost guarantee you'll hear nothing from them at all.  No support for Ms. Harris's picture of course.  But nothing at all if possible.  Thus is America, 2021.  For our part, the boys went out together again and helped my mom pay respects at the local cemetery: 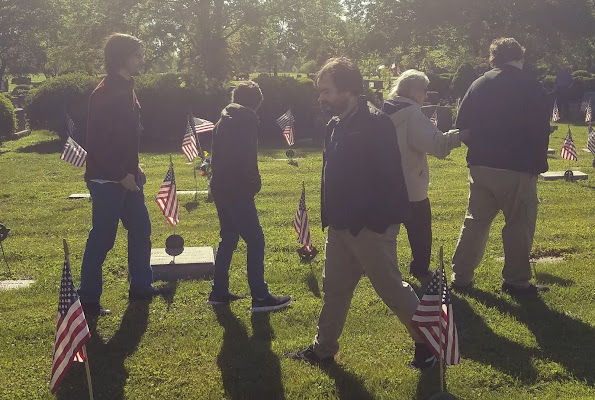 Count us with the top picture.