How to recognize stupidity when we see it 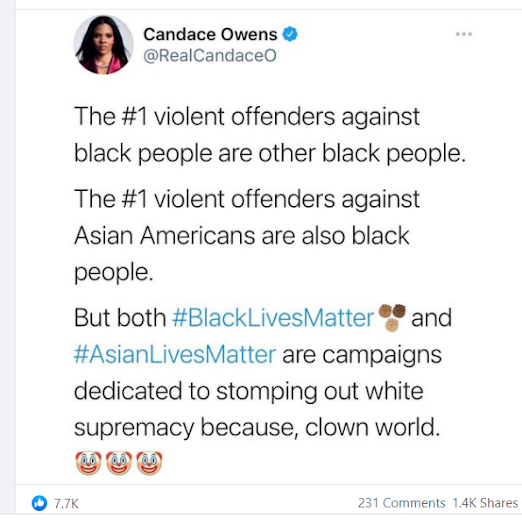 That's Candace Owens, she's black and she's stupid.  How do I know?  Because she doesn't fall in line with liberal dogmas and narratives.  And we know any black person who questions or challenges liberalism or the left is duped, brainwashed, stupid, an Aunt Jemima (or, depending on gender identity, an Uncle Tom).

On the other hand, when we point out that blacks may have been duped by the Democrats and modern liberalism, we're called racists for suggesting blacks could be duped, brainwashed or are in some way stupid.  That's bigotry of course.

One of modern liberalism's most endearing qualities is hypocrisy and double standards. It couldn't survive without them.  So reliant is liberalism on applying standards to others that liberalism has no intention of abiding by itself, at times it comes off like a core value of the Left.

Sometimes I notice the more radically hypocritical the Left becomes, the more likely it is that something is seriously wrong with what it's promoting.  For instance, given that it lashes out brutally at anyone who ponders the sudden change of heart that the pro-Segregationist Democratic Party experienced in the 1960s, and wonders if it didn't simply find a new way to keep the black man down, I can't help but wonder if there's something to that.  Looking at things in the black community since it threw itself fully into the Democratic camp, it does make you wonder.

It also explains the point Miss Owens is making.  It's easy to believe the Left doesn't give two swinging damns or a hell about black lives, Asian lives, or any lives, given that it carefully guards against anyone looking at the main causes of most murdered black Americans.  It appears to care about lives insofar as it can exploit them.  That comes from the modernist tendency of not basing agendas on principles, but basing principles on agendas.  In this case, caring about one convenient life while ignoring ten thousand inconvenient lives.

Posted by David Griffey at 7:44 AM

Email ThisBlogThis!Share to TwitterShare to FacebookShare to Pinterest
Labels: The evil the Left does, the Joy of Racism on the Left