The Massacre of the Innocents and the New Prolife Movement 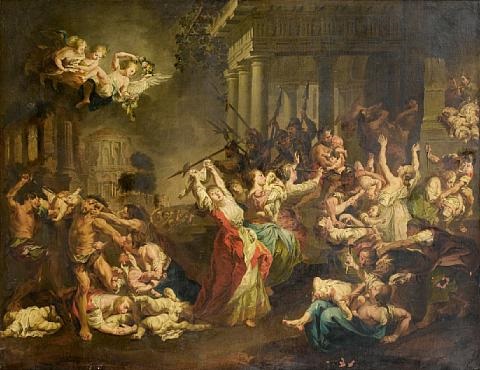 In Rama was there a voice heard, lamentation, and weeping, and great mourning, Rachel weeping for her children, and would not be comforted, because they are no more.

Today is, in Western Circles, the day set aside to remind people that Christmas was never meant to be only a Hallmark moment. It is the day to remember Herod's order that the newly born of Bethlehem must be murdered.

In recent years, this has become a time to mourn our modern culture of infanticide.  Like human slavery, euphemistically called Human Trafficking, abortion is merely infanticide with medical muscles.  It reminds us that warning against losing the Christian West's civilization could mean a throwback to pagan barbarism is lost on the hearing today.  The fact is, an increasing number of Western citizens appear to want to go back to an age of pagan barbarism, complete with infanticide, matricide, patricide, human sacrifice - as long as it means Hollywood versions of pagan sexuality is thrown into the mix.

Hence why the concern that we are moving to a post-justice, post-reconciliation era where guilt and innocence no longer matter is also falling on deaf ears.  The point isn't that we have blind and gullible sheep wandering after the next Cool Thing, unaware of the side effects that come with their goals.  They want those side effects.  They have determined that a world of eliminating the unwanted and those who threaten one's own fiscal reality that, as often as not, involves endless debauchery, greed and narcissism is a world worth having.

And it's this movement that the so called New Prolife Christians have allied with.  It is the same that those who use such terms as Social Justice, or Seamless Garment, now slavishly follow.  So while a decade ago, you could find so many across ol'St. Blogs using this day to lament the modern era of infanticide, today those who have posted on this are practically none.

A few who cling to the old ways have done so.  But so many who proudly call themselves New Prolife have posted nothing at all.  Or they have deflected to this or that political policy regarding immigration or healthcare or such.  Anything but dealing with the topic at hand.  Granted I couldn't search for everyone who goes by NPL, but of those I know who do, there was deafening silence.

When Christ was born into the world, the Roman Empire had only recently stepped into the fray in the regions around Jerusalem.  Rome was now the ruling authority, the dominant political reality.  Despite a history of bravely facing up to those who would challenge the Jewish faith, a great many residents of Judea by now seemed tired of the fighting.  Increasingly, Jews were learning that when in Rome, do as the Romans.  Some resisted, even violently.  But many sought ways to either preserve the Faith at Rome's pleasure, or just go full blown Greek and be no different than the Gentile Roman down the street, or just do what it takes to get by.  When Herod, a puppet of Rome, ordered this massacre, it was done in line with the prevailing culture of the day. Though those immediately impacted would no doubt be weeping along with Rachel, most had come to accept that this was the way of things now that Rome was in town.

Some things never change.  The silence of New Prolife Christians where abortion is concerned, or the desperate attempt to deflect to ludicrous and flawed notions of abortion being men's fault, or capitalists fault, or anyone else's fault, just shows that, deep down, they darn well know what they are doing. More to the point, those who have said nothing at all reveal themselves the most.  For the best way to see guilt is to note silence where outward opinions once would have been.  Bring up adultery, even as a joke, to someone sleeping around behind his spouse's back, and watch the eyes drop and look away.  Today, many who strut like peacocks under the self-proclaimed title 'New and Whole Prolife' have looked away.
Posted by David Griffey at 10:58 AM