Yep.  Mark lifted his universal bans a few weeks ago.  So initially I was just going to post a few one off warnings to Mark to pull up from the trajectory to hell that his apologetics appears to be on.  Then I decided, to atone for my many sins, I would read his blog every day and comment at least once a day through Advent.  At that point, I would wish a polite adios and offer a prayer for him to wake up in time.  I didn't comment every day, but did visit.

Now granted, I knew what I was getting into.  Mark resorts almost daily to lies and false accusation, calumny and defamation of character, spreading false rumors, character assassination, name calling, personal attacks, or similar things that apparently have made him quite a big name in Catholic apologetics circles.

So Mark posted a typical post emphasizing the rise of anti-Semitism, but exclusively that which is on the Right.  Included in this was labeling several he apparently doesn't like as closet Nazis with their own brand of anti-Semitism.  He's done that before, accusing this or that Catholic or Christian of being Nazi.  The Left has long used the old 'be liberal or be evil' tactic, and it's worked like a charm.  Mark and others across the Catholic blogs seem happy to use the same effective tactic.   That anti-Semitism is on the rise is doubted by nobody.  Hate crimes in general are on the rise.  And obviously, to any sane person who keeps up with the times beyond Left wing rags, the anti-Semitism is well beyond the borders of right wing neo-Nazi white supremacists.

Nonetheless, Mark naturally focused only on that Jew-bashing that could be used to subsequently bash opponents of the political Left and its narratives and policies. Included in the post was the usual 'opponents of George Soros only hate him because he's Jewish - thus Nazi!'  So I decided it might be worthwhile to see one of Mark's older posts on the subject: 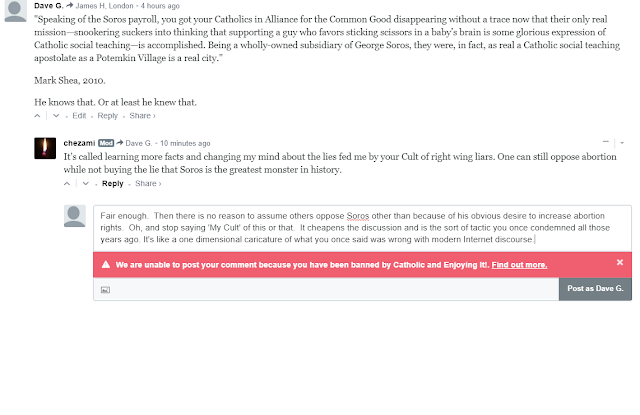 Yep.  Banned.  Not even a chance to point out that perhaps others deserve the same consideration he's given himself on the subject.  Not a chance to rebuke Mark's false suggestion that I somehow defend anti-Jewish rhetoric.  The number of times my name has been dragged through the mud on Mark's blog being beyond count, but likely more than has ever happened in my life: among Orthodox, Protestant or non-Christians combined.  FWIW, if you ban someone for merely posting one of your own posts, that should set off bells and whistles right there.

But Mark has become like a mindless thrall of the political left.  Any deviation from the left, per Mark's rhetoric, proves your own brand of evil.  On Mark's pages, one's relationship to Christ comes across as some dashed off afterthought.  Sure, it's borderline heresy.  But Mark can hardly be blamed.  Increasingly across the Catholic Church, it's one's fealty to particular policies regarding immigration, global warming and the economy that defines one's righteousness and even pathway to heaven.  Actually living a chaste life or one in obedience to traditional Church teaching, or being charitable and giving to the poor, or even one's relationship to Christ, looks increasingly irrelevant.

Like a growing number today, whether by design or by accident, Mark acts as if it is fealty to the modern way that matters.  And like most, especially inclined as Mark is to his own brand of rhetorical flourish, failure to fall into Mark's circle of acceptance damns you.

I saw similar behavior to this in some more radical Protestant fundamentalist, independent churches back in the day.  But usually not this extreme.  That beyond the lies, sin and heresy of his own posts and comments, his combox is a bastion for racism, evil, murder, wishing death, abortion (including late term), witch hunts, sexual debauchery, heresy, blaspheme, tyranny, slander, anti-Christian and anti-Catholic rhetoric, merely reminds you of what was no doubt behind many who proudly goosestepped behind the ones who got invited to the best parties in Germany in the 1930s.  For example, lest you think I exaggerate, a smattering of comments from only a couple posts in a couple days: 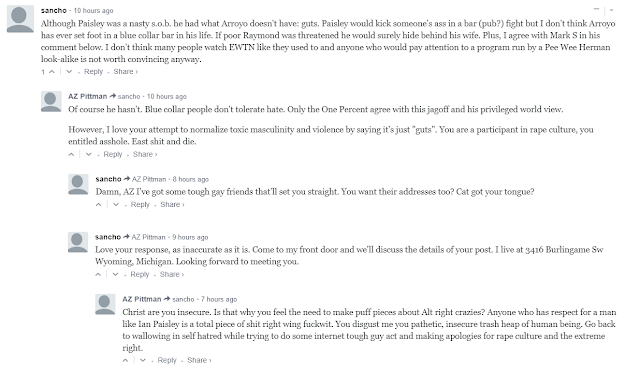 When I called out Mark on his failure to reprimand the fellow who wished a gun rights activist's children would be murdered by cops, you'll note the limp-wristed 'ah come on now, stop with the whole I want children murdered thing - or I'll do something!'  Compare that to outright banning someone for merely posting one of Mark's own posts (you'll note that even after pushing back against Mark's criticism of wishing the children murdered, the commenter was allowed to post again).

Sure, Protestants had their Fred Phelps*.  But you know what?  Anyone who was anyone stepped as far away as humanly possible from him, and practically beat each other up to get to the microphone to condemn him.  But then, Phelps spewed hatred against the designs of the popular culture.  Mark's is right along with the designs of the popular culture.  Perhaps that's why he can say or do anything, or excuse or advocate anything, and he still gets accolades from the leaders and clergy and prominent voices of the Church. 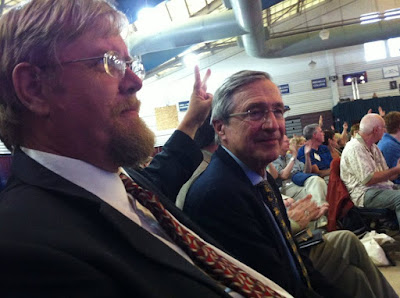 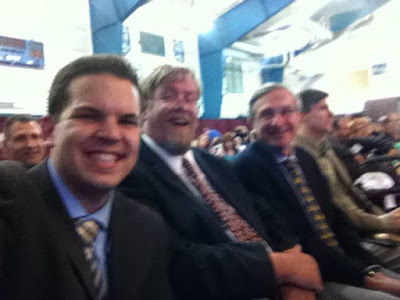 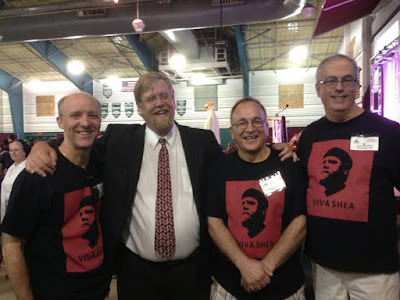 Again, the problem is not - repeat, NOT - Mark.  It is that such a flagrant display of near blasphemy, heresy and sin is generated by someone not only popular, but one who is increasing his own profile among Catholics, Catholic leaders and even clergy and Catholic ministries.

Yes, in fairness, Mark seldom presents himself this way in public.  In an ironic twist, he almost personifies Social Media era passive aggression, in which face to face he swoons over people and insists he's just Mark and everyone just love Jesus and let's be friends.  He then slinks back to the protection of his computer screen and lobs his endless slander and lies and minimizing the manifold sins of the Left through any means necessary.   So there is a chance - a chance mind you - that not everyone knows of his alter ego.  Nonetheless, many do, and even make excuses for him.  And don't forget Catholic bishops who have moved aggressively against various Catholic ministries or spokesmen for far less, but for far more traditional perspectives.  This strongly suggests that, once again, there are those in the Church poised to ally with a grave and intrinsic power of Satanic evil rather than give up suffering for Jesus on upper middle class incomes at the best awards assemblies.

As my oldest son, who remains Catholic, once said, "The Catholic Church has taken some long naps in its history, and right now it is in the middle off one of its longest."  I fear he is right.

Oh, and lest you think I'm too harsh with the whole 'heresy, lies and sin' thing, I give you:

In other words, we came here to trash Jew hatred (which apparently means only those on the right who, per Mark, hate Jews - other examples being noticeably absent).  Do you disagree on abortion?  Do you support abortion?  It matters not what your reasons are.  Aborting babies is just one of those things we'll have to respectfully agree to disagree over.  But opposing Republican political and economic policies?  Now that is something over which we can come together as allies!  I give you the New Prolife Movement Seamless Garment in action and its take on what the teaching of the Church really should be about.

*BTW, this is not to suggest that Phelps was guilty of everything Mark engages in.  His issues are merely well known, and one of the closest comparisons I have from outside of the Catholic world.
Posted by David Griffey at 7:00 AM

Email ThisBlogThis!Share to TwitterShare to FacebookShare to Pinterest
Labels: Catholic Church and the Left, deals with the Devil, New Prolife Movement