Remember how liberals used to mock conservatives who said there was a desire to push America toward Socialism?  I give you this story.  The joy and euphoria in the article are palpable.

Young people in America, by greater numbers than ever, are embracing Socialism as the wave of the future.  That's because of a couple things.  First, it's what they've been taught in schools, colleges, in the media, or society in general.  Second, let's face it, the Market hasn't exactly been kind to everyone over the last few decades.  Those who are 'middle class' today are nowhere near as well off as those who were considered 'middle class' forty years ago.  And combined with the poorer segments of society, that's an awfully big hunk of Americans who can no longer take their kids to Disneyland or even buy a new car, much less afford things like major medical expenses and retirement.

Back in the day, a local father could work in the meat counter at an independent grocery store, and the mother could work as a secretary, while affording a spacious three bedroom ranch on about a 3/4 acre plot of land, and also send their two kids to college, and happily retire.  I have news for you.  Today, a father working at a grocery store with a wife who is a secretary (administrative assistant) will likely not be living in a spacious three bedroom ranch on 3/4 of an acre, much less sending their kids to college or coming close to having a decent retirement.

Unfortunately, for some conservatives that became the Law of the Market.  Sorry about your luck.  The Market is as the Market is.  Even as some necessary expenses, like healthcare, became debilitating and almost assured that a growing segment of the population would likely experience bankruptcy, even if they had insurance, from a major health crisis, 'the Market is as the Market is' was the mantra.  Other expenses have followed in the healthcare costs footsteps.  Not to mention that many of the corporate leaders themselves are far from 'Capitalist/Free Market' advocates.  One can almost believe that they purposefully used their station to torpedo the market by making it look bad.

But for whatever reason, a growing segment of the population came into America where healthcare costs were through the roof, prices far outpaced wages, quality and quantity were declining in kind, and necessities like college and retirement were becoming a pipe dream.  The Left seized upon this to blame everything on Satan's economic theory (Capitalism), while,  unfortunately, you had loud advocates  of the Market continue with 'We're sorry, but it's the Law of the Market, you should have striven for the acquisition of financial gain to the exclusion of any other conceivable priority.  As it is, you don't got it, you don't get it.'

It's a little like someone telling you your father is a horrible person, and your father answering by hitting you with a club while insisting it's not true.  Therefore, we have this: 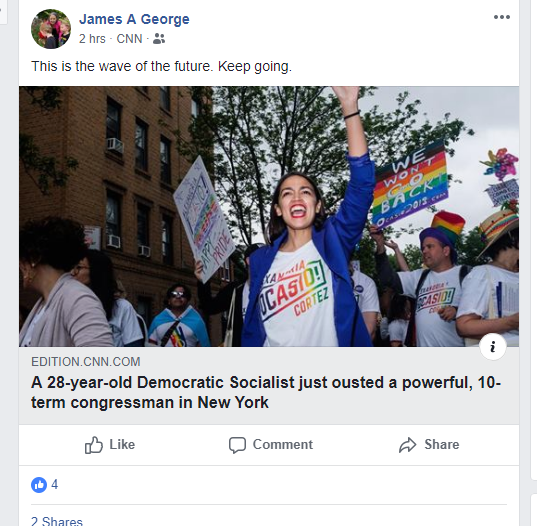 Once again the Left is proud and ecstatic about what it once said would never happen.  Just like it said it would never punish people over gay rights.  Your best bet?  If the Left says 'We'll never do such a thing in a million years', understand what they really mean is that they have every intention of doing it within ten years or less.
Posted by David Griffey at 9:16 AM

Email ThisBlogThis!Share to TwitterShare to FacebookShare to Pinterest
Labels: Socialism in America, The Leftist Juggernaut, The media and the Left