If I understand Fr. James Martin

Apparently he is saying that anyone should be able to work at the American Bible Society: 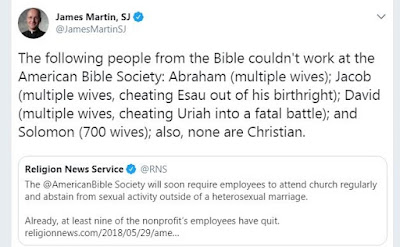 See that?  It's like the Book of Acts was never written.  Why, how can you possibly think homosexuality is wrong, or insist Christians be part of your Christian ministry, without having to bar King David or Abraham from the table?  Isn't it all the same?  Did anything big happen between the time of Esau and now?  And sin?  Why we're all sinners, so how can we have standards?  Let practicing homosexuals in.  Let serial adulterers in.  Let racists in.  Child molesters.  Murderers.  I suppose.  Maybe those last ones are going too far.   It's hard to tell.  Perhaps he's just bending and twisting to allow for the LGBTQ community, and not thinking about the long term ramifications.  That happens when trying to pound the square peg of Leftist heresies into the round hole of a Christian model of Creation.

But such are the attempts to cozy up to the greatest heresy since Arianism.  LGBTQ acceptance is merely an extension of that heresy.  But the heresy itself is a denial of Jesus the Christ.  If, to Arius, Christ was the Logos, albeit not co-eternal with the Father, then how much more is the heresy that denies Jesus even existed, or at best was merely an obscure traveling preacher who looked like John Lennon and was executed for his efforts, after which he rotted into the fabricated myth and legend as some Christ of Faith?

And yet that is the cornerstone of the modern Left, and everything - its theories of the universe and its origins, the origin of man, human morality, soteriology, ethics and morality - are all founded on that heretical pronouncement.  So what can you do?  Well, do what Fr. Martin and a growing number of Christians giving up the fight must do.  Appeal to anything, no matter how ludicrous, and hope that either we're too ignorant to care, or too lazy to care.  All the while, of course, ignoring the fact that while we imagine such tactics will somehow convert the Left, it is the Left that is actively and militantly working to convert the Faithful.  And, if I may say so, doing a bang-up job.
Posted by David Griffey at 8:30 AM

Email ThisBlogThis!Share to TwitterShare to FacebookShare to Pinterest
Labels: Catholic Church and the Left, Leftist Evangelism, The Leftist Juggernaut