Nope?  Neither do I.  Maybe I just missed it. 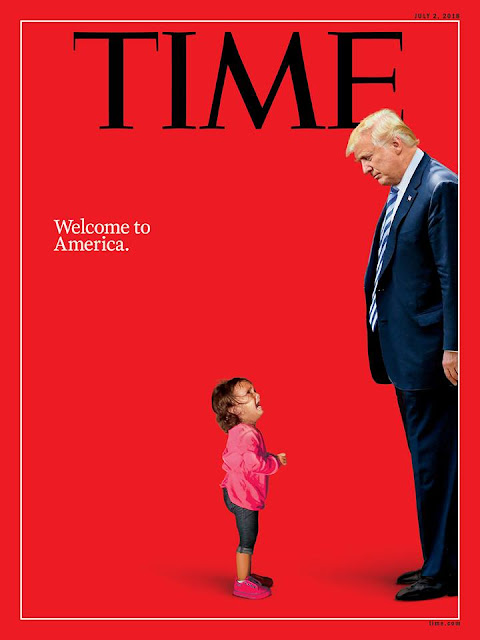 Memo: It's increasingly likely that much of the political Left doesn't give a damn about immigrants, babies or otherwise.  They can rot for all it cares.  It sees them as convenient for the time being.  When no longer convenient, off to the old shoe pile.  The same goes for murder rates, crime rates, poor, suffering, AIDS, racism or anything.  It matters when it's beneficial for it to matter.  Otherwise, not so much.

UPDATE: Ooops. It looks like the little girl crying was not really crying for the reasons the picture suggest.  That reminds me of the editorial cartoon following the Oklahoma City Bombing, where the sad photo of the fireman cradling a dead infant.  The editorial cartoon reproduced the photo perfectly, but added a thought bubble for the fireman that said "Damn Limbaugh."  The fireman, IIRC, was outraged at the thought that he would care about politics while holding a dead infant.  But such is the emergent Left.  Ethics and common decency stop dead when it involves advancing the political Left.

UPDATE II: Double Ooops Ooops. I'm starting to lose track of all the times Trump was said to have lied about the border situation when he didn't, photos that turn out to be fake, and statements that turn out to be false.  So it turns out the caged children photo, the one that helped jump start the "Trump Incarnates Auschwitz" backlash against the policies that he invented for the first time in history, is also a fraud.  It turns out the children were not caged by the Gestapo American ICE agents under orders of Hitler/Trump.  Instead, the pictures are from the kerfuffle around The Deportation That Cannot Be Mentioned (that is, the deporting and separating of Immigrants under Obama).  Yes, some liberals did complain.  But there is an eternal difference between "We really don't like what you're doing to immigrants Obama - we love you dude!", and "From now on Hitler is an angel compared to the True Spawn of Satanic Hell Trump and the American Holocaust!"  Again, consider that much of the outrage is likely fake, convenient, and only for advancing political power for the Left.  Any other explanation, and I'm afraid it just doesn't make sense compared to the emerging truth.

UPDATE III: OK, so it's getting crazy.  It's been brought to my attention that Mark Shea also posted on this as proof of Trump/Hitler.  It was pointed out to Mark that the picture was fake, that is technically a lie.  We all remember the Great Lila Rose disaster of 2011, when Mark, Dawn Eden, and a host of Catholic bloggers decided to make lying the premier issue of the day.  If we found that Planned Parenthood was selling body parts of unborn babies for profit, that was hardly more important than Christians encouraging lying.  That was the Law.  So one would expect Mark to be consistent, right?  Sorry, the only thing consistent about Mark Shea is that almost everything he once called good he now calls evil, and everything he called evil he now calls good (or at least defends or ignores).  So Mark made it clear that the truthfulness of the image is irrelevant next to the horrors of the border.  Unlike 2011 when he made it clear babies dismembered and sold for profit were bad, but nothing next to the horrors of lying.  Flee apologists who make it their profession to call good what they once called evil, and evil what they once called good.
Posted by David Griffey at 4:47 PM

Email ThisBlogThis!Share to TwitterShare to FacebookShare to Pinterest
Labels: The media and the Left but I repeat myself, The Power of Propaganda