Star Wars was for grown ups

We watched Star Wars last night.  Not the 'New Hope' garbage.  The real thing, the version that came out in theaters back in the height of the Disco era.  Not the one with the deplorable CGI, or where Han waits to ignore a small explosion next to his head before he shoots.  The version that actually knocked our socks off some 35 years ago.  Yes, because of Lucas's strange arrogance and blindness to his own diminished talents, it was not the top of the line release.  When he released the originals on DVD, he made it clear to his fans that out of punishment for not celebrating his eternal creative perfection, the original releases would be without tweaks to make the quality images better, no HD, no Dolby, no nothing.  Basic VHS quality on DVD.

And yet it was a million times better than the re-released New Hope versions, and numbers don't exist to illustrate how many times better it was than the Prequels.  Even with my boys gibbering through the thing, asking questions and giving commentary, it was a flight back to the olden days.   Nostalgia can be fun.  I could almost remember what each scene was like.  Back in the day, when I worked an entire summer to afford every screening I could get, each scene was like a movie unto itself: the opening battle, the introduction of Vader, the introduction of Luke, the Cantina, the Death Star, the duel, the dogfight, the ceremony.  Each one was as monumental for my young mind as the scenes of Citizen Kane to a film student.

But something hit me.  We were watching some recent CGI laden blockbuster later, after the kids went to bed.  Too tired and worn out to do much else.  I don't know what it was.  It had sword fights, and CGI effects, and strange monsters (mostly CGI), and it was pretty stupid. I only watched a little before deciding my dreams would suffice for better entertainment.  Then it dawned on me.  Star Wars was not a "Kid's Movie".  In fact, in those days, there were not kids movies, except that Disney studios produced (like The Apple Dumpling Gang, Gus the Field Goal Kicking Mule, The Love Bug, etc.).  Movies were for adults only (R rated fare such as The Exorcist  The Godfather, Dog Day Afternoon, Saturday Night Fever), or they were for everyone (Rocky, Smokey and the Bandit (eh), Jaws, and Star Wars).  If it was determined that kids shouldn't see something - like my Mom not letting me see Jaws for fear I would use it as an excuse to dodge bath time - then kids didn't go.

But movies weren't made for kids or even adolescents.  They were for adults or for everybody.  As was Star Wars.  Fast forward to today.  Movies today, especially "blockbuster fare" like the one we watched last night, are made specifically for a young adult to even childish audience   And it didn't become that way overnight.  Somewhere, after Star Wars and before that CGI one we saw last night, filmmakers found out what music makers did in the wake of young Sinatra: that due to kids' impressionable minds, there are boundless dollars to be had.  Rock and Roll lives and breaths on that premise. 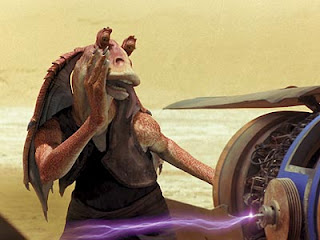 It took movies like Star Wars, and later E.T., to realize that there is a gold mine to be had in making movies not for adult sensibilities, but aimed squarely at those who are still struggling with pubescent hormones.  This change must have already been in full swing by the time Return of the Jedi arrived, because Lucas was certainly dumbing down the story and the gags and the general production to a more childish level.

Of course with the advent of PG-13, there is a new category, that summer blockbuster supposedly too intense for younger kids, but just in line with that all important adolescent young teen male.  And the humor, the story lines  the basic production all speak to that.  The CGI movie we watched last night wouldn't have rated a TV movie of the week when I was growing up, if for no other reason than the childish and laughably immature stunts, gags and bathroom humor.   Some might be PG-13 because they strive for better, more adult level intensity and complexity, like any one of a boatload of Christopher Nolan movies.  But on the whole, most are movies that could say 'nobody over 18 admitted, because Lord knows they shouldn't want to be.'

Books have gone the same way.  Starting with the Goosebumps series, and finding perfection in the Harry Potter phenomenon, publishers learned that with kids, the profits can be endless, no matter what the quality.  In fact, the strange thing is, as our movies and our blockbuster output focuses on appealing exclusively to the youngest, I can't help but notice that our adult audiences are increasingly settling for childish things.  Not just enjoying a movie that's young at heart (like Star Wars), but actually lowering our expectations to movies, music and books that are young in content.

I can't tell how many adults lifted Harry Potter up as some lost Gospel of Christ.  And Lord help you if you disagreed.  All over a book series written, marketed and published for kids.  Same with the Comic book movies, or action movies, or remake movies.  I fear that was a problem with Peter Jackson's Lord of the Rings series, that he needed to appeal to the childish, the teen mindset with a book that was anything but a child's book or teenage schlock.

But it also seems that adults are going that direction as well.  Perhaps it's a combination.  Rush Limbaugh once said something I've never forgotten, some years ago.  On his birthday, he pointed out that he didn't feel as old as he was.  Not just in the usual sense.  He looked around and noticed that most people his age didn't look or act his age.  Not as he remembered it.  In fact, he noticed that his generation (Boomers) were the first generation in history that didn't have to grow up.  For the first time, people could fight to stay kids, to enjoy kid things, to obsess with kid hobbies and games.  Basically, adults could continue on acting like kids. Today there are adults who play with Legos.  There are adults who read kid books and go to the mattresses over what those books are, like kids used to in school over things like baseball cards or action heroes in comics.  Today, it's the adults.

So maybe the "kiddifying" of movies today is the result of the audience. Maybe the audience has become that way as producers of our cultural relics have decided to market to younger minds for the quick buck.  Maybe, like most things, it's a combination.

All of this came after a discussion at Mark Shea's blog over whether Stephen Colbert and Jon Stewart are pundits or just comedians.  Clearly they are pundits.  Obviously their shows are there to advance agendas with the same zeal as an episode of Limbaugh.  But yet, there were people arguing as if the two can never be reconciled; that to be a comedian must necessarily preclude you from being a pundit.  As if things can never change, and boundaries can never be crossed.  Why do they believe it?  Well, mostly, because Stewart and Colbert say that's all they are.  So it must be true.  Just like those Rock Stars of old insisted they really weren't singing about sex or drugs.  The lyrics really meant other, purer things.  So it must have been true.  Even as kids we knew better (and giggled behind parents' backs because of it).

Today, perhaps we know it's bunk just the same.  Or maybe, as adults, we've become so immersed in a culture that has completely turned itself over to the kiddy mindset, that we've lost that common sense discernment that comes with age.  Maybe people actually believe that since they say they are comedians, they must be right.  Maybe they just want to believe it, like I wanted to believe C-3PO was a real robot.  Perhaps instead of helping kids become adults, endless marketing to kids is causing adults to remain perpetually kids. I don't know.  But it's a thought I had after watching that story from a long time ago, in a galaxy far, far away.

Sometimes I think it wasn't for no reason that Paul said there came a time when he put away childish things.  Not that good childish that can retain that spark of child like marvel at the world, but childish, like the inability to deal with reality in a way that reality demands.

Posted by David Griffey at 6:35 PM