Once in a red moon

We were out the other night when the moon was full and the crisp autumn air couldn't help but turn our thoughts toward witching things and creepier things.  I whipped out my dumb phone and quickly snapped this little shot as the clouds departed for a few and set up a spectacular shot of the moon. 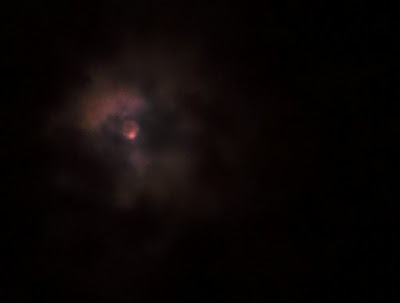 Why it turned red, I don't know.  But that only added to the eeriness and that feeling that things were about to go bump in the night.  Not a blue moon, but one almost as rare as my posts have been lately.  Which is all to say that I'm hoping to get back into things.  It's been a long year, a rough year, a turbulent year.  But things are being decided upon which could seriously alter the course of our future, and may open up more chances to toss out ideas here and in other forums.  I'm also seriously rethinking bringing back the comments section.  I'll explain why at a later date.  I see that readership has, naturally, dropped over the last months as my contributions have faded away.  I understand.  But hopefully things will get back, and I'll have this old blog up and running in no time.

Meanwhile, prepare for a haunting time as All Hallows Eve approaches, and the turn of seasons prepares to welcome that most joyous and wonderful time of the year!
Posted by David Griffey at 10:33 PM