The Stalinizing of Papa John's continues

So it's official.  Papa John's will erase the image of Founder John Schatter from all logos.  This from the outcry that came about due to his criticism of NFL players who protest the National Anthem his use of the Word Beloved of Rap Stars Everywhere.  He, having white skin, cannot use the Word Beloved of Rap Stars Everywhere, even if to illustrate a point.  Those who have dark skin may do so with impunity.  It's all about the race, as MLK used to say.

This is the world we live in.  With no real power, the Left is making it clear what kind of country it will be when they have power.  Of course this was mostly about Schatter's criticism of the NFL's anti-anthem protests.  Since he was a visible and well known corporate leader (think Dave Thomas or Harland Sanders), we couldn't have him speaking against the Leftist agenda.  It was only a matter of time before he made a mistake.  Or spoke in a way that could be spun as a mistake.  Or simply existed while not conforming to the Left.

Since Marx had little use for things like mercy or forgiveness, and much of the modern Left echoes, if somewhat wearily, the ideals of Marx, we shouldn't be surprised that we've reverted to the very kind of witch hunt mentality that liberals of old once decried as emblematic of the tyrannies Marx helped build.

FWIW, I will never eat at Papa John's again.  I was never a fan.  Nonetheless every now and then its pizzas scratched a certain itch.  But no more.  Whether because of cowardice, or simply the growing sense that Madison Avenue would gladly go Communist and bury the Church and America if that's where the money is, I don't know.  But either way, when I think of Papa John's now, I'll think of nothing so much as this: 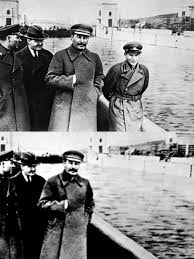 Posted by David Griffey at 3:34 PM

Email ThisBlogThis!Share to TwitterShare to FacebookShare to Pinterest
Labels: Left and a New Communism, The End of Liberalism