When I visit some parts of the Catholic blogosphere 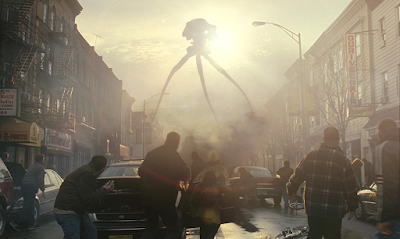 I think of The War of the Worlds.  So these alien vessels were lying dormant for thousands of years, waiting for the signals from space to awaken them and prod them into action.  So there seems to be an entire segment of the Catholic world, most notably on the blogosphere, that sees itself as the First True Catholics since the apostolic age, or perhaps since Aquinas.  The world has waited as the True Church sank into slumber, awaiting the first Trinitarian Popes to come and awaken them.

Probably not accurate, but I think it.  I especially think it when I see things like this.  I admit, I paraphrased what was said by my team lead.  I took some liberties and condensed what he said and other points he has made.  He also didn't serve overseas, but was wounded while serving here in the states.

In another setting I might elaborate and be more detailed.  But notice antigon.  Now antigon hates me with the white hot fury of a thousand suns.  Don't know why.  But he loathes me and holds me in contempt.  He is why I'm still there. For reasons I don't know, antigon has taken it upon himself to charge in whenever I comment and begin calling me names.  Calling me a moron, dolt, idiot.  Accusing me of being stupid, a liar, a wimp, a sissy.  And strangely enough, Mark has done nothing but join him a couple times to accuse me of being a right wing partisan to boot.  There is no way in the world I'm leaving the blog and letting him think he's the reason.  Hence my remaining for a time.

Now, you'd think insults, accusations, and a flagrant disregard for fellowship would be a problem.   Not so for the modern Fanboy Catholic who dominates the blogosphere.  It's a bizarre mix of liberalism, fundamentalism, and the worst stereotypes of Catholicism. The teachings of the Church and Christ simply don't apply to them.  Be assured, not all Catholics are like this.   But it's enough that this approach is becoming more popular, and in fact Mark has been rewarded for this direction.  So someone in the Catholic world likes the combination.  Especially if they consider themselves the first True Catholics who long awaited the coming of the only Popes who really matter.

Posted by David Griffey at 7:17 PM

Email ThisBlogThis!Share to TwitterShare to FacebookShare to Pinterest
Labels: Catholics and the Internet, The Catholic Blogosphere