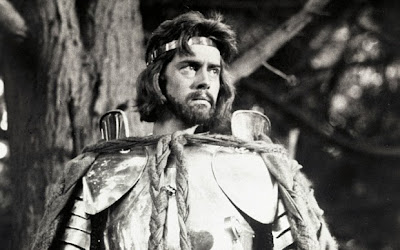 It came to my attention this week that British actor Nigel Terry has died.  For many of my generation, Nigel Terry is and will ever be King Arthur.  With his sad, beat dog eyes, he exemplified the sorrowful, melancholy king of legend.  Not torn over love or betrayal, he was torn over the burden of being a man for all eras and simply wanting to be a man.  And Terry nailed the look perfectly.  Of course he had other film credits to his name, not the least of which was his impressive spot in The Lion in Winter.  More recently he captured the ill fated, love sick Mr. Boldwood in an excellent production of Thomas Hardy's Far From the Madding Crowd (no Marcus, not Far From the Maddening Crowd!).  Mostly an actor of the theater, Terry made his mark during the period I call the great Fantasy Renaissance that was ushered in by Lucas's Star Wars, and remained until sometime in the mid-1980s.  There will be other films about the boy and the sword in the stone, but for me and many my age, there will only be Terry's saddened leader wielding Excalibur.  RIP,


"I was not born to lead a man's life, but to be the stuff of future memory."

Posted by David Griffey at 8:37 PM