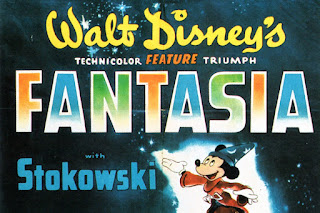 And no, I don't mean that deplorable digital dung heap released in 2000.  That should have been a warning sign about how far we had fallen as a civilization.  Though, in fairness, in 1941, many in the upper class of the day no doubt thought the same thing when they viewed Disney's attempt to elevate animated film to both a sophisticated art form as well as an art form for the masses.

Upon its initial release, he failed on both counts.  Those in 'Society' scoffed at the cheap and disrespectful approach to the lofty heights of classical music that his animated film demonstrated.  More damming for Walt Disney, however, was the fact that the public also turned their backs on the work.  What were lines dancing about next to hippos and dinosaurs behind a type of music with which many were unfamiliar?

That ended Disney's attempts to elevate animated film.  Though he would dabble with this or that artistic spin on a cartoon - most notably his 1959 film Sleeping Beauty - he resigned himself mostly to producing fun but fluffy cartoons of roughly 3/4 movie length.  Many became classics of course, only to fall on the PC chopping block in our time.  But none tried to reach the artistic heights he was grasping for in 1941 with Pinocchio and Fantasia. 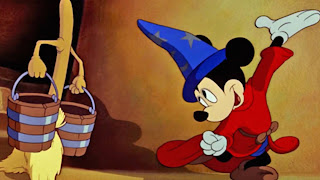 In our house, Fantasia is a sort of 'semi-viewing' pre-autumnal tradition.  My love for autumn is well know to anyone who has spent more than a few years following my blog.  As the boys grow and move on in life and the traditions fade, it might not have the same punch that it used to have.  Likewise, in an odd twist, I find myself less nostalgic now than I used to be in my younger years.  I'll have to think on that strange development some day.

But not today.  Instead, I just want to post a shout out to what I consider one of Disney's best ever attempts at anything, and that's the original 1941 Fantasia.  I'm no film critic, so I'm not giving a point by point review.  I merely point out that it's been a sort of pre-game warm up for our Fall festivities over the years.  It's not an every year thing, but I find it fits nicely into what I said some years ago about fantasy and Fall appearing to go hand in hand.

In keeping with Disney's serious Anglophilia and love of old European folklore, there is plenty of 'fantasy' in the mix.  Though I never cared for fantasy growing up, I've warmed to the genre over the years.  This was helped by my sons being into it, having come of age in the 2000s when The Lord of the Rings, Harry Potter and all things wizardry and mythical monsters were the name of the game. 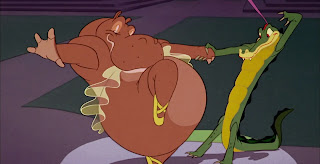 Fantasia manages, in small doses, a mixture of classical fantasy and classical music.  The rebellious Leopold Stokowski provides the soundtrack, and his interpretation of the scores in question is still the measuring rod I use when I hear the various pieces in other outlets.

Deems Taylor, a music critic of the time, provides the narration.  Like all things that tout the latest tech or science, it can seem dated if he dwells too long on the latest, greatest breakthroughs of the day.  Likewise, in an age of Google, many of the things he mentions about the musical pieces are old hat and well known, though in the day it was likely assumed that Mr. Everyman wouldn't have known some of the basic bits of trivia about this or that composer or composition. 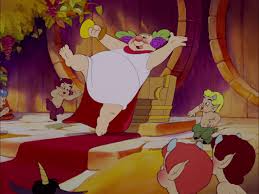 The real stars are the Disney artists.  In each case, they were given more or less a blank check to envision different interpretations of the music, and then set them onto celluloid.  For the sequence of Beethoven's 6th "Pastoral" Symphony, they literally invented colors, as Disney gave the artists an open invitation to mix the pallets any way they wanted, and come up with anything the could for the coloring.  It was a bit like The Beatles' recording sessions during the Sgt. Pepper album: the sky was the limit.

There are plenty of things to like about this film, but overall it grasps a certain 'here's the thinking in 1941', as much of the world was already plunged into war, and Americans were holding onto the last desperate - and likely futile - hope for innocence and peace of bygone days.  Much of high culture was still separated from the masses, thus it remained 'high culture.'  Likewise, appeals to faerie or myth or supernatural evil could be presented, knowing we were already secularizing our understanding of reality, while those old tales were not entirely lost on those same masses.

But it's a fine 'fantasy lite' prelude to the coming fall season.  The Sorcerer's  Apprentice, initially the only piece Disney envisioned, is as fantasy as you get.  Complete with conical hats and wizard's laboratories in old castles, it's straight out of a European Fantasy primer.  The Nutcracker Suite ditches nutcrackers and Christmas trees and rather envisions a fairyland nature spirit dance of animated plants, ballet fish and elemental sprites bringing about spring and winter. The aforesaid Pastoral Symphony is one of the fantasy high points, taking us back to classical Greek mythology filled with a drunken (but not nasty) Dionysus who bounces about surrounded by pegasi, centaurs and cupids.  Zeus and Hephaestus and various Olympus companions even make an appearance.

Compared to these, my least favorite segments are the Toccata and Fugue in D Minor (sorry, but that's an organ piece - by BACH!* - and strings don't quite do it for me), and The Rite of Spring.  As much as it may have looked cutting edge at the time, it seems a bit dated and I've never been a Stravinsky fan anyway.  We won't discuss the dancing hippos and alligators in the Dance of the Hours.  I either hate it or find it charming and sometimes both and neither at the same time.  I'll have to get back to that some other day. 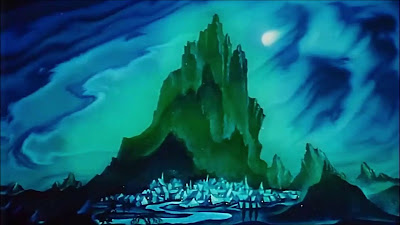 The creme de la creme, of course, is the dueling pieces at the end, Mussorgsky's A Night on Bald Mountain transitioning into Schubert's Ave Maria.  Now, the Ave is, if you can grasp it, a somewhat secularized version.  Clear and obvious religious accoutrements have been removed from the scene.  While we hear the music, all we see is a candlelight procession by hooded sojourners through a stunning use of camera work, c. 1941 (and completed only moments before its world premier).

But even if Chernabog strikes an eerie similarity to Bela Lugosi, and the pilgrims could be of any faith or tradition, the segment works.  It's an apt ending to a film chockablock full of old world images, ancient myths and supernatural assumptions.  No matter how things are going, and how various pieces in the film sit with me on a given viewing, the final segments never cease to inspire me and remind me of what our modern tech/STEM world seems desperate to forget:  In the end, we're always about the battle between good and evil, whether in the ancient world, the medieval, or the modern STEM obsessed world in which we live.

And no, I won't get into the usual spiel about the old racist images that had to be removed and are no longer found on copies produced in the last several generations.  A reminder that what we're seeing today about changing and editing offensive art has been going on for decades, even while the ones doing it were insisting there is nothing more heinous or unacceptable that censoring or editing offensive material from art. 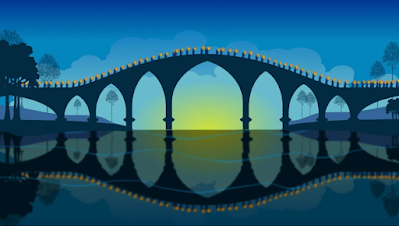 Oh, and one more thing.  To be exact, it's the soundtrack that really marks the beginning of the pre-season anticipation in our house.  When I was in college and 'collector's sets' were all the rage in the exploding VHS days, I received a few such packages for Christmas.  They often had booklets and some extra bits and pieces, a lithograph perhaps, an old promotional poster, and some such.  The Fantasia Set, which I still have, came with two CDs (again, new tech back then) of the entire soundtrack.  Round about August, I slip those into our old multi-CD player and let Stokowski herald the coming fun.
Like the Carpenter's A Christmas Portrait begins the seasonal anticipation once Santa rides down in front of Macey's in the minds of my sons, so they say hearing the opening notes of Fantasia's version of Toccata and Fugue to this day sets their minds to looking toward fall,.  It's almost a Pavlovian response.

If nothing else, we've managed to instill in our sons a love of traditions, even if certain popes may not care for such things.  Though traditions invariably rise and fall, and eventually fade away, I find they're also a nice binding glue for the family.  A binding, I might add, that even if crazy bad like 2020 Covid era torpedoes almost everything, we can still cling to a few signposts out of all the traditional signposts we've built.  And one of those, easily kept no matter what is happening in the wide world, is a walk through Disney's master achievement that spirits us away for a time to a land of good and evil, dinosaurs and wizards, and even dancing hippos from a world ready to put all hopes of clinging to the good old days to rest on the battlefields of WWII.

I thought of that as we had our annual Harvest Feast and, you just know it, I made sure the two Fantasia CDs were front and center in the music score in the background.  Again, that's the cue to get ready, because the fun it about to begin.