To hate America now that spring is here 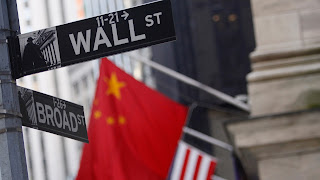 Or perhaps more seasonally appropriate, now is the winter of our dissing America.  So Mark Cuban, owner of the NBA team The Dallas Mavericks, has confirmed what anyone watching basketball had noticed.  That is, he has banned playing the United States National Anthem before his team's games.

So there you go.  One of the greatest coups of the Left's war against the Christian West was its alliance with Corporate America.  Why are so many corporations jumping on board the various devices of the Left?  The anti-Christian, anti-American, anti-Male, anti-White, anti-undesirable, anti-God and even anti-Equality bandwagons that are becoming SOP in 2021 Leftism?

Hard to say.  My boys think it's because a global market is worth more than an American one.  And  in a world where, despite multicultural narratives, oppression, terror, tyranny, slavery, genocide, discrimination and persecution are still as common as bad reality TV is in our country, it might be tough to justify making money off such nations in the same way it would have been tough making money off Nazi Germany during the early 1940s.

The smart business solution?  Join in the Left's attempts to portray the Christian West and American Experiment as the font of all evil in the world; as the most wicked, depraved, infamous and heartless civilization that ever existed.  After all, what right do Americans have to complain when they see American corporations milking China for what money they can all while China continues to slaughter, oppress and terrorize anyone and anything in its path?  Hey!  This is America, the most evil and deplorable nation in history people!  Back off and stop being hypocrites.

Perhaps.  It certainly makes sense.  But whatever the reason, one thing is sure: Corporations and CEOs and other wealthy power players are embracing the death of the West for the same reason anyone in the market does anything - the bottom line.  Whatever financial hit we think they might take, they've run the numbers and concluded it's worth it for the overall benefit of the all important bottom line.

That's what happens when we conservatives spent so many years defending corporate interests in the name of Capitalism at whatever cost.   For some reason, we forgot that if we defend the 'it's the bottom line' principle as the all important principle of everything, there might be a time when the bottom line is best served by those market interests destroying everything else we hold dear.  Live and learn I suppose.

Posted by David Griffey at 9:39 AM

Email ThisBlogThis!Share to TwitterShare to FacebookShare to Pinterest
Labels: Decline of the Christian West, In money we trust, The Decline and Fall of the American Dream