The things you find on the Internet 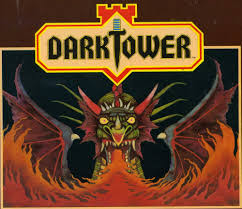 Not all is bad on the Internet, and sometimes that even extends to the world of Social Media.  Take for example this blog entry on James Maliszewski's blog of interesting things.  It's a blog for those who are interested in the world of sci-fi and fantasy, especially as those genres pertain to role-playing games.

In this case, he muses on the artwork of the  board game Dark Tower.  I've posted about that game several times over the years.  For the longest time, it was the Holy Grail of my childhood nostalgia.  I used to regale the boys about it time and again.  And as I wrote here, once I got my hands on a complete copy for a surprisingly acceptable price (it kept within the realm of inflation if you figured it), I was happy to see the boys actually enjoyed it.

Now, I admit - and so have they - that its replayability factor is a bit limited.  One reason is that they know, and I know, that the old thing can only last so long.  Each time we turn it on we hold our breath.  That makes it something they don't just want to drag off the shelf and play ever day.  It is an original from going on half a century ago.

But beyond that, it is primitive by today's standards.  As the boys say, the AI is essentially not AI.  There is no balancing factor.  Each game is basically seeing who will get plastered by dragons, plagues, brigands, and all manner of bad luck while seeing who else skips along with no adversity and makes it clean to the gates of the tower.   As funny as that can be, it has its limits in terms of taking time out of the day to watch it happen.  After all, as we know, our technologically advanced age has far less time than we did in those lazy, hazy days at the dawn of the computer revolution (you know, the revolution that was supposed to get computers to do it all for us so we'd have infinitely more time to kill).

Anyhoo, Mr. Maliszewski muses on the artwork for the game.  It never dawned on me that the artwork would be from anyone not in a cubical at some toy manufacturing company.  Turns out, it was an actual artist.  That might be why it was so evocative and its absence in the kickstarter reboot is so keenly felt.  The same, of course, for the digital sound effects, at least one of which would never pass the 21st Century censors.

But it art goes to show the level of production that went into the product.  My boys call it creative inflation.  The idea that, while things are certainly more complex, more impressive in terms of output, and sometimes more enjoyable (not insta-kill due to lack of AI), there is something missing in today's product lines.  Somehow, if you consider creativity in terms of inflation like you consider box office receipts when comparing Gone With the Wind to The Avengers, you end up the same way.  The latest may be more on so many levels, but if you think of the newness and limits of almost 45 years ago, and think of the production and output compared with everything we have today (including 40 years of learning) is it really that much better?

I think they're onto something.  In fact, without me pointing it out to them, I pointed it out here.   So with all that, take it away Orson (Milton Bradley demonstrating its quality investment by having none other than the great Orson Welles throw out the sales pitch):