Ten years is a long time 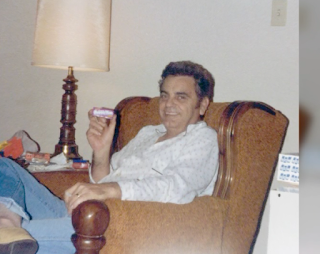 It was ten years ago this year that my Dad died.  Today is his birthday, and I'd rather focus on that.

As dad's go, he wasn't bad in the least.  Neither he nor my Mom ever pretended to be the best parents.  They weren't.  And as I've gotten older, I've learned the here and there of their foibles.  For instance, my Dad was not particularly good at finances.

Oh, we had enough money to get by on.  Being a railroad engineer paid surprisingly well.  It's just that, owing to his white privilege, he grew up on the dirt poor side of the Great Depression.  Because of that, when he had money, he did the logical thing: spend it.  As far as I know he never owned a credit card or took out loans.  He paid cash.  Which was fine in that there was no real debt around at the end of his life.  There was no real money in the bank either.  My Mom has gotten by largely because of the railroad's legendary (and convoluted) retirement system - the main reason he stayed on the job, per him.

It was fun having a Dad who worked on the railroad, I will say.  More than once I was able to climb up on those monstrous engines and see things from a different perspective.  It's something to go by and look down at semi-trucks when, as a motorist, they usually look so massive.  But it was a job to Dad.  Several of my friends had model train sets as kids.  Though he bought me a couple, he didn't do anything with them.  I asked why he, an engineer, wouldn't have some vast model railroad empire as a hobby.  He said when factory workers played with model factories and businessmen played with model offices in their spare time, then he would play with model trains.  To him, it was a job.  None of the coveralls and stereotypical engineer hats.  He wore polo shirts and sunglasses, being among the first to realize such old garb was not needed as the old age of steam passed  to the age of diesel (a transition he was more than happy about, having no nostalgia for the old steam engines).

But that was Dad.  It was the work, and that was the best thing about it.  I won't say he was a workaholic.  But he always seemed happiest doing things.  Whether working on cars, working on the house, working in the yard, or just working, he was never one to sit idly.  Being of that WWII/Depression generation, there weren't many things he couldn't do.  His crowing achievement was building a house in the country, tearing it all but down to its foundations, and rebuilding it between his twelve hour shifts in a city over an hour away.

In some ways, I saw that as symbolic of him.  Again, due to his white privilege, he grew up in an abusive home with a father who could have been good, but fell victim to the alcohol bug.  It was his abuse, in fact, that lead my Grandmother to an early grave, dying over a decade before my older sister was born.  Thus we never knew her, only of her.  In fact, her death left a mark on my Dad.

She died while he was in the army, stationed most of the time at Fort Hood.  He had been out on maneuvers and, apparently, when out on maneuvers you are itching to get back home.  I guess they were all due to go on leave upon their return.  When his unit rolled into camp, he was met by an officer who offered to take his rifle and his gear.  He later said at that point his heart sank because that never, ever happened.  When he got to the company commander's officer, my Mom was there with a chaplain.  He knew then it was horrible news.

I think that cast a certain pall over him over the years.  He was reluctant to just cut loose after that.  He was also careful to make the most of the moment.  Whether it was our plentiful Christmas hauls, or the house he built for us, or all the work, I think his goal was to make sure we had what he didn't, and that he would never have to say, "If only I'd...".  Because of that, and because of a nature that was generous almost to a fault, he was respected and liked by classmates, his coworkers, friends and family alike.

Nonetheless, I also learned a lesson about what we work for.  When it came to improving houses, there were few who could rival Dad.  He was best friends with the local realtors who knew they would make extra on any house C.C. Griffey was selling.  And sell he did.  Despite not needing to, we moved constantly.  Four years in a house was a long stay for us.  I came to dread that moment I walked home from school only to see moving boxes once more in the living room.  There went another neighborhood filled with friends.

And yet, when I have the chance to drive by the old town, I look at the houses in which we lived.  Some still look nice enough.  Others have fallen into disrepair.  Some are near slum level (for the money we had, we didn't live high on the hog, and the small homes we most often lived in belied the homes we could have had).  But as I look at them, it makes me think of all the hours, days, weeks and years of effort he put into making those houses into showcases worth well beyond what he paid.  It's nice. And a job well done.  But to what ultimate effect?

We did plenty as a family, had vacations, and sometimes he would break for a time and play around with us. But much of his time was spent building us the home and houses he never had.  Sometimes - sometimes, mind you - I wish he would have spent more on the leisure and the fun and less on the work and the sweat.   After all, in almost every case, it's the fun times and family times I remember most fondly.  That's probably why my room and basement (doubling as my library) have stacks of books, strewn papers, alongside piles of games and endless shelves of DVDs that we've watched with the kids over the years.  We keep the house as safe as we can, and as functional.  But my spare time is spent with them at church, at play, and just as family.  I wonder what extremes my sons have noticed in me that they'll work to offset once they have kids.

Anyway, all that was off the top of my head as I think on this birthday and the ten years it's been since I was able to talk to him.  Speaking of the fun times I remember, it's strange the things we keep regarding loved ones over the years.

So I heard a song while driving about the other day.  It was Close to You by The Carpenters.  I never hear that that I don't think of a special moment with my Dad.  The song had just been released, and was playing on our old stereo-record player console in our living room.  Everyone else was somewhere else in the house.  It was night, and I was by myself with the lights off, playing with some strange flashlight that had a clown head that made creepy clown faces on the walls.  I got it for Christmas and to this day don't know why.  Anyway, Dad came round the corner and sat down on the cedar chest next to me.  He pointed out the song on the radio, said he really liked that song, and figured we'd be hearing more from the group that recorded it.  He was right.

So for Dad and all the memories of a father who worked to give us what he didn't have, here's the queen of mellow herself.  I have it on the best of authority that it was a favorite of yours.  Pax and Miss you Dad.

Posted by David Griffey at 2:10 PM