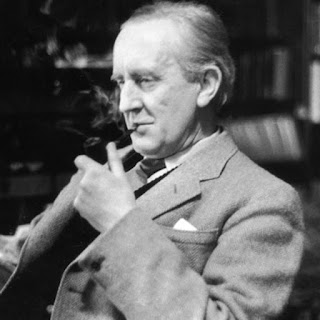 One of my earliest memories of blogging is my stumbling on a post celebrating the late J.R.R. Tolkien.  It was a couple years after the last of Jackson's initial trilogy.  It was a fine piece if I remember, focusing on the splendor of his literary creation and the rather difficult life he had that may have laid the groundwork for much of the insights and wisdom that find their way all through his mythical Middle Earth.

Ah, that was so long ago.  Not that things weren't already changing.  We watched a National Geographic special on The Lord of the Rings that was released at the time of Jackson's first movie of the trilogy.  Among trivial and and interesting tidbits, it did include a brief nod to 'Tolkien as European Imperialist Racist', with a couple scholars admitting that his views clearly reflect that White Man's Burden worldview of old.  But it was just a bit part of the special.

Today, of course, entire reams of pixels have gone into lamenting Tolkien as a racist, sexist, misogynist, white nationalist, anti-Semite, imperialist, and colonial apologist.  Several years ago I was pointed to a web-page run by a professor of English in merry old England itself.  The debate he opened up on his blog was whether LoTR should be banned due to the obvious racism and bigotry and sexism of his works, or whether they should still be valued as literature.   IIRC, I think it was in response to some school in England saying it would be removing Tolkien's works for those reasons.

The good news is that, on his blog at least, the overwhelming consensus was that Tolkien's works should stand and be allowed to stay on the shelves.  The bad news is that Tolkien, even per the professor in question (who claims fanship of Tolkien's works) was deemed the racist, Nazi, woman hating white supremacist that he was.   McCarthy holds not a candle to the inquisitors and witch hunters of today.

And the speed with which this has become accepted, is promoted in all of our cultural outlets, and is even being embraced by religious and Christian leaders, bodes ill for the near future.  There's a reason that, following WWII and the era of segregation, Americans were taught not to make one dimensional cardboard cutouts of even the worst villains of history.  Otherwise we might miss clues that could end up warning us of where we are going wrong.

But that's not now.  We're entering into a dark age, the kind that Tolkien himself would have lamented.  We've heard it all before, in Southern outlands from men in white hoods, from fanatics in rallies in central Germany in the 1930s.  We heard it from those swept up in the Red Scare, and in accounts we were forced to watch that gave fanciful versions of the Salem Witch Trials and the Scopes Trial.

And now we're hearing it and seeing it all unfold again, only the purpose now is to tear down the very Western Tradition that brought forth the ideals used to condemn such evils in the first place.  How it will be at the end, I can't tell.  But I have a feeling it will be generations not yet born that will have to figure out how to fix it all. And such a lament for an inevitably long defeat is just the type of development Tolkien would have understood all too well.
Posted by David Griffey at 10:42 AM