When my predictions come true 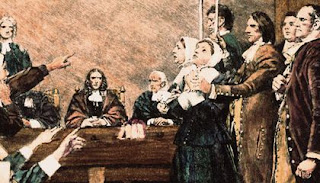 As I've said before, every now and then some old post will show up with a zillion hits.  No clue why.  But this one popped up the other day.  It's a reflection on the Roy Moore kerfuffle.  Remember him?  The weird cowboy hat wearing, horse riding, revolver wielding caricature of a southern conservative who ran for office?  The same who was accused of statutory rape when we suddenly learned that the Sexual Revolution's 'if she's just seventeen, you know what we mean' principle was now tantamount to rape?

Yeah.  So I read through it, cringing at missed spelling or bad grammar as I often do when I read earlier posts.  But then I came to this:


If [Roy Moore] loses, however, and in a year nothing more is said, no further accusations come out, and nothing is pursued, then I fear we will have seen a McCarthy like character assassination endorsed and supported by our press, our political establishment and, yes, even our religious institutions.  And that cannot be good for our future.

That was my wrap up, if you don't care to stumble through the post itself.  Think on that.  I said if there was no follow up - and there really wasn't - to all these manifold accusations of statutory rape and sex perversion, that it would bode ill.  After all, that would embolden those who wish to use the Kangaroo Court of Appeals as their primary weapon for taking out political opponents in our nation.

What happened after this?   Think Brett Kavanaugh.  A man I don't hold any particular affection for, who nonetheless was subject to the most egregious witch hunt in America since Salem.  And how the press, Trump opponents, pundits, white liberal Catholics, and a host of activists jumped on board!  A single woman making a thirty year old accusation with conflicting memories of the scene and no corroborating evidence except four friendly witnesses who all denied the crime, and on that a swath of our country screamed at Kavanaugh 'burn witch, burn!'.

Now we have a president impeached with no clear evidence of a crime committed.  I'm no presidential historian, but I think this is the first time a president has been impeached or tried for impeachment without being accused of committing an actual crime.  Nonetheless, that same swath of our country says that's good.  That's real good.

Things like evidence, accusation of actual crimes, burden of proof, due process, presumption of innocence?  They died within the first 24 hours after The Washington Post published its story about Roy Moore's alleged sex crimes.  Two years later, we're even farther away from caring about anything but the destruction of our opponents through any means possible.  And that never bodes well for anything under the sun.
Posted by David Griffey at 6:00 AM