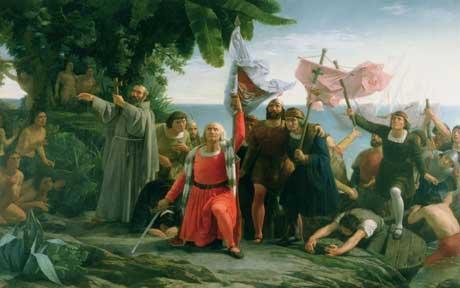 See how easy it is.  What Christopher Columbus is damned for is the color of his skin, when you get right down to it.  We know that Native Americans enslaved each other.  So did Africans.  Most thinking, educated people know that Muslims had a robust slave trade based on arguments not too dissimilar to the 'Africans are animals' arguments we hear from Europeans.  We know Native Americans fought brutal wars of conquest, genocidal extermination, and could out-Machiavelli the best European princes.

Did Columbus personally kill people?  Did he personally enslaved Natives?  Yep.  It wasn't uncommon in those rough and tumble days (unlike our sophisticated and morally superior age we live in).  Of course that doesn't make it right (see Native American atrocities above).  But the true 'hate' of Columbus that people embrace and advocate is for no other reason than the color of his skin.  He was a white European.  Over the centuries, the Native population would be displaced and even killed by others who were white Europeans.  Therefore, guilty - him and his entire being.

It's racism, of course.  Just like those who defend illegal immigration.  When a case is brought up of Americans being attacked, or even murdered, how often have I seen the response 'Oh yeah!  Well look what your ancestors did!'  Again, racism through and through.  The same racism that heaps the sins of an entire civilization over subsequent centuries on the shoulders of a single explorer.

So while I lament the actions taken by Columbus personally, and wish he had been a better person, I still celebrate him.  Because I still celebrate aspects of the dying West, and therefore celebrate the events that unfolded to bring a Christian founded society to one that was in no way saintly or even close to Christian in its moral standards, I don't need a scapegoat to apologize for the valueless West. For all the flaws of the West, they were flaws because of deviations from its moral grounding.  The flaws of the Native population, like so many other civilizations, were flaws grounded on the adherence to its moral groundings.

And since I don't want to be a racist, even if it's the hip and awesome racism of post-modern hipsters who can't help but be awesome because awesome, I'm not going to condemn a man because over the centuries others who looked like him and shared his skin color did other wrong, even heinous, things.

So here's to you Christopher!  It won't be long before the juggernaut of endless censorship reaches you, as it will no doubt reach others.  But while it lasts, while freedoms and liberties are still around, I'll part way from my moral superiors, and remember the boldness and courage it took for you to do something amazing, especially from the vantage point of an era where so many moral crusaders at best risk the terrors of Carpal Tunnel syndrome, and little more.
Posted by David Griffey at 8:21 AM

Email ThisBlogThis!Share to TwitterShare to FacebookShare to Pinterest
Labels: Censorship for the Stupid, Decline of the Christian West, Our Big Politically Correct Brother