It's the Feast of Pentecost today

And did you wear red?  Red is, of course, the color associated with the Holy Spirit.  Plus, this being a more somber reflection, it also brings to mind the blood of the martyrs.  In our day and age, and with the emphasis of our modern pop culture, many forget that Christians have died by the millions over the years, and those are the ones dying for the simple fact that they are Christians.  Even today, we see story, after story, after story of Christians being persecuted, oppressed, and even killed around the world.  So red works. 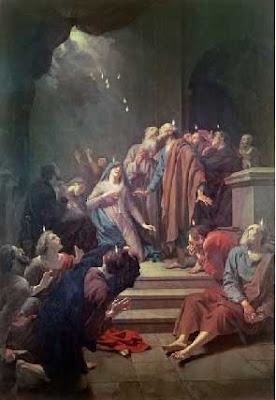 But the emphasis on this day is the pouring out of the Holy Spirit.  That moment in Acts that was seized upon by a new movement in Christianity that would soon claim the name Pentecost for itself.  The movement was a reaction against the growing tendency in Christianity, toward the end of the 19th century, to reduce everything to a philosophical reflection.  Gone were stories of miracles, supernatural occurrences, and ghost stories.  Such simple and unsophisticated notions had no place in a world dominated by names such as Darwin, Freud, and Nietzsche.  At least in Protestant circles, a growing number of Christians were turning the Faith into a club, a hobby for the soul, where the important parts of life were happening on Wall Street, in the factories and laboratories, and being seen in the horseless carriages, telephones, and electric light bulbs that were changing the face of the human race.

So realizing that something important was missing, that some supernatural presence was needed, and indeed, was heralded in the pages of Scripture, a movement was born that sought to recapture the miraculous essence of the Faith.  This was no Faith that merely spoke of ancient miracles in an ancient world that no longer applied to today, this was a Faith that demanded the miraculous here, now.  Miracles needed to be seen, and evidence that this God of miracles was alive and living in the believers of today was demanded.  And so the day that the most flagrant outpouring of God's believers through Jesus was zeroed in on, and lifted up as the example of examples for all believers.  This moment in which the Holy Spirit came forth upon the faithful, allowing them to speak in the tongues of the nations, was the focal point that would define this movement, and forever link the feast of Pentecost with its most cherished attributes.  That movement was, of course, the Pentecostal movement.  And today, Pentecostal Christianity continues to be a vibrant force for growth and evangelism, particularly in countries around the world, especially south of the Equator.

But, as is so often the case in post-Reformation Christianity, a kernel of truth was bought at the price of the harvest of the Gospel.  In fact, outside of Pentecostal circles, it's not difficult to find problems with the singular emphasis on speaking in tongues as evidence of the Holy Spirits indwelling.  After all, in Paul's letter to the Corinthian church, he makes it clear just where this gift of all gifts exists on the ladder of miraculous manifestations of God's grace:


“Are all apostles? are all prophets? are all teachers? are all workers of miracles? have all gifts of healings? do all speak with tongues? do all interpret?  But desire earnestly the greater gifts. And moreover a most excellent way show I unto you.” (1 Cor. 12:29-31)
“If I speak with the tongues of men and of angels, but have not love, I am become sounding brass, or a clanging cymbal.” (1 Cor. 13:1)

“For he that speaketh in a tongue speaketh not unto men, but unto God; for no man understandeth; but in the spirit he speaketh mysteries. But he that prophesieth speaketh unto men edification, and exhortation, and consolation. He that speaketh in a tongue edifieth himself; but he that prophesieth edifieth the church. Now I would have you all speak with tongues, but rather that ye should prophesy: and greater is he that prophesieth than he that speaketh with tongues, except he interpret, that the church may receive edifying.  But now, brethren, if I come unto you speaking with tongues, what shall I profit you, unless I speak to you either by way of revelation, or of knowledge, or of prophesying, or of teaching?  Even things without life, giving a voice, whether pipe or harp, if they give not a distinction in the sounds, how shall it be known what is piped or harped?  For if the trumpet give an uncertain voice, who shall prepare himself for war? So also ye, unless ye utter by the tongue speech easy to understood, how shall it be known what is spoken? for ye will be speaking into the air.” (1 Cor. 14:2-9)

When I’ve been to a Pentecostal service, and I see people falling over chairs, waving arms around, rattling off in speech that only God could understand, I’m reminded of these passages.

Now any biblical scholar worth his salt will tell you that the ‘tongues’ Paul speaks of that appeared to be the rage at Corinth, was not the tongues that Luke relates in his account of the Holy Spirit’s outpouring at Pentecost.  Here, we have something that is remarkable, fantastic, strange, confusing, something that Paul admits is beyond the comprehension of everyone at the assembly.  But it is not a miracle.

What happened at Pentecost was a miracle, a bona fide invasion of the natural order by the power of God.  The biblical description, as is typical of its historical context, describes the event in stark, yet simple, terms:

And when the day of Pentecost was now come, they were all together in one place.  And suddenly there came from heaven a sound as of the rushing of a mighty wind, and it filled all the house where they were sitting.  And there appeared unto them tongues parting asunder, like as of fire; and it sat upon each one of them.  And they were all filled with the Holy Spirit, and began to speak with other tongues, as the Spirit gave them utterance.


Now there were dwelling at Jerusalem Jews, devout men, from every nation under heaven.   And when this sound was heard, the multitude came together, and were confounded, because that every man heard them speaking in his own language.  And they were all amazed and marveled, saying, Behold, are not all these that speak Galilaeans?
And how hear we, every man in our own language wherein we were born?  Parthians and Medes and Elamites, and the dwellers in Mesopotamia, in Judaea and Cappadocia, in Pontus and Asia, in Phrygia and Pamphylia, in Egypt and the parts of Libya about Cyrene, and sojourners from Rome, both Jews and proselytes, Cretans and Arabians, we hear them speaking in our tongues the mighty works of God.

(Acts 2:1-11)
It was not a bunch of people rambling on, using incoherent sounds and guttural noises.  It was the Apostles, with the Holy Spirit (shown as tongues of fire sitting upon each one), speaking ‘the mighty works of God’, and yet in a way that the people of the world could understand. 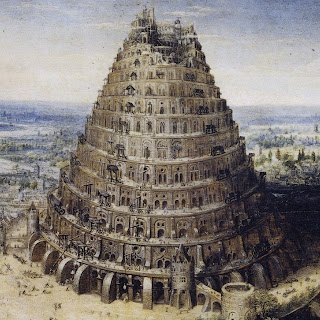 Let’s do it this way.  Imagine going into a marketplace in New York, where people from all over the world happened to be milling about, none of whom could speak English.  Then you begin to speak about God in English, but all of a sudden, they all understand you.  It doesn’t matter a wit if one can only speak Japanese, or another Russian, or another French, or another Arabic – each one can understand what you are saying.  Not because you have some sudden magical ability to connect through ESP, but because it is God who is speaking through you, and it is God who is opening their ears and doing the translating. It is by the power of the Holy Spirit that the age old divider of peoples, that the first century Jews would have remembered from the story of the Tower of Babel, is being brought down.


That was the beauty, the essence of Pentecost. In an age in which the entire world saw itself as us vs. them, as our civilization vs. the barbarians, as our empire vs. the nomads, as we the chosen people vs. the Gentiles, the Gospel stood two thousand years ahead of its time and proclaimed a new revelation: There was indeed but one God, and this God, Creator of all things, sought to reach out to all people.  This God was not the God of the Jews, or the Arabs, or the Romans.  This God was God, and all people were His people.  Now, in Christ, there were no longer divisions.  Paul would reflect this in his own letter to the Galatian churches, when he wrote that in Christ, we are no longer Jew nor Greek, slave nor freeman, male nor female.  All are one.
You can, of course, reflect on how successful the Church has been at living up to this lofty ideal.  But there it was, two thousand years ago, when barbarism and empire were the news of the day, when people were chattel at best, where slavery and human sacrifice still existed in numbers, and the plethora of gods that were worshipped set themselves against people for a host of reasons, the Creator God reached through the barriers and said once and for all that He had come to be savior to all people, for it was the world He loved, and the World he sought to redeem.  And for that, Pentecost should be a happy holiday.  So happy Pentecost!  No matter how we fail to live up to the ideals, we can rejoice that ours is the God who loves all people, me and you, rather than me or you.
Posted by David Griffey at 11:49 PM