The legacy of Feminism 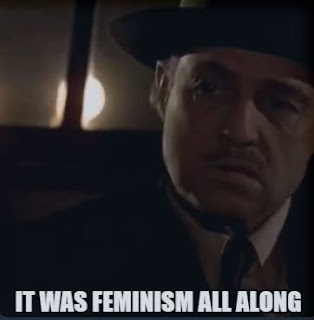 Is best summed up here.  Some woman I've never heard of receives praise and adoration from her fellow sisters and an enthralled audience.  Why?  Because she boldly announced she is leaving her husband of fourteen years.  Why?  Because she wanted a life more focused on herself, that's why.  And being a woman, she can proclaim such a reason as 'self-love' to an adoring world and receive endless accolades and high-fives.

Yep.  I've said before that I haven't been able to find an earlier example of a group of people able to declare themselves the only thing that matters and being socially applauded for the trouble.  Not that men haven't been self-absorbed, self-focused rascals over the ages.  But they had to wrap it up in something pretty: God, king, country, providing for the family, helping the village - something.

But with feminism, at some point it stopped being about the right to vote and became 'women should focus on themselves - because, that's why.'  Certain things, like sexual liberation, were eagerly welcomed by men who apparently thought this would solidify women as one dimensional sex objects for men's sole consumption.  Women played along.

Now, of course, men have been all but emasculated by feminism and what women want.  Think on abortion.  The current dogma says a birthing person woman gets pregnant and can decide if it's a precious life or a worthless bunch of sludge to be eliminated.  Men?  What can they do?  Not a damn thing, that's what.  They stand in the corner wearing a 'castrated dunce' cap and wait for the woman to decide - keep the baby, at which point the man had better fork out the bucks to pay for it, or terminate the baby, sorry about your luck guy.

I've often said it's likely that men of this age will not be the men future generations of men look back to as anything other than a cautionary tale.  So beholden to women did men become as sex became the only thing that mattered, they would happily sell their sons down the river in order to get some, no matter what women do, say, or grab for.

Naturally women aren't the only benefactors of this idea.  The whole 'it's about me' has poured over into almost everything.  So that most young radicals and activists are proud to say it's their world to save and inherit or drop dead.  After all, why should women have all the fun?

By the by, if I could add one more thing.  The power of this feminist narrative is such that when I bring things like this up, I can almost bet 50% of conservative men and 2/3 of pro-life, traditional Christian women will pounce on me with some version of 'Hey!  Women should have rights!'  As if raising a question or challenging the narrative in any way is the same as saying women should have no rights.

I know this for a fact.  I can't count the times in conversations I've mused on the impact that this approach to feminism has had, and even some of the most down home, stay at home, Ephesians 5 women will fire back that I'm some how suggesting women should be what feminists say men have always wanted them to be.

That's power for a narrative.  Beyond proving my axiom that no matter what liberalism hoists on the world, at least 1/3 of conservatives will jump on the bandwagon, it shows just how engrained the world's approach to feminism has become.  That' s why most men, no matter how much they lament the state of things, stay quiet, at least in terms of looking deeply into the modern state of women's issues.  Sort of like white people questioning not just BLM, but the whole modern culture of modern black Americans.  You don't dare.  And you can bet if you do, half of everyone who normally agrees with you will turn on you and fire. 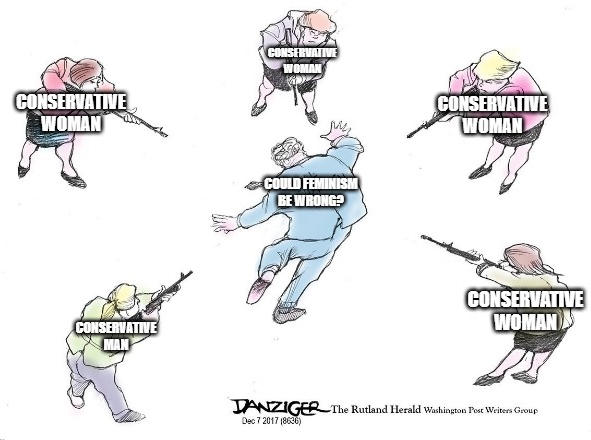 Posted by David Griffey at 8:08 AM

Email ThisBlogThis!Share to TwitterShare to FacebookShare to Pinterest
Labels: Feminism, The Power of Propaganda