Why orthodox Christians putting their hope in the GOP is a profitless endeavor.

Of course the problem isn't the bill, which goes out of its way to enshrine gay marriage as a core American value.  It's that it accepts the premise that once you let those rascally conservative republicans do something like limit abortion rights, the next thing you'll have is lynchings and gas chambers and women dying in back allies and tortured homosexuals.  That's what this bill was all about, riding that wave of media hysteria that claimed with Roe overturned, the next thing they'll do is go after gays, interracial marriages, and other nasty things.

The idea that 'once a conservative wins, the universe is that much closer to exploding' is an oft invoked media narrative.  Time and again whenever the press reports on a conservative proposal, it's framed as either an immediate threat to various groups, or a stepping stone toward Jim Crow, swastikas and pogroms. 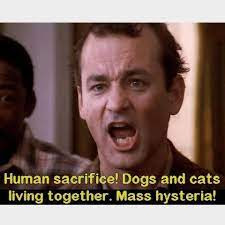 The Republicans who voted for this are either too thick to know this, or they don't care because they are no more conservative than Bernie Sanders.  Or, like many conservatives, they operate on the idea that if we just insist we're not like those nasty racist sexist bigot conservatives over there, they'll like us - they'll really, really like us!  Foolishness of the highest order.

In any event, the GOP is all there is for those who don't want to support a party beholden to the secular paganism of the global Left.  Those who don't want to crawl into a cell and let the world burn that is.  Because the Left is a movement increasingly clear in its designs to destroy liberty, freedom, equality and the sanctity of life.

Nonetheless, never forget how flawed this alliance is for those who seek the right means to the right ends.  At best it is the least of the evils.  At worst it's a terrible and ultimately fruitless waste of time.

Email ThisBlogThis!Share to TwitterShare to FacebookShare to Pinterest
Labels: Conservatives and Christians, Republican dumb, When the Right is Wrong